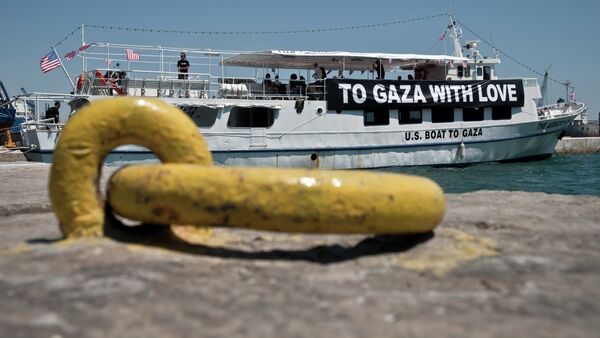 Attempts to damage a propeller on one of the ships in a flotilla set to sail to the Gaza Strip and break the Israeli naval blockade is sabotage, activist Dror Feiler told Radio al-Shams on Thursday.
Egypt Opens Borders With Gaza, Allowing Thousands of Palestinians to Cross
MOSCOW (Sputnik) – Israel imposed a blockade on Gaza in 2006 after an Israeli soldier was captured by Hamas militants. The blockade was strengthened in 2007, after Hamas took control of Gaza.

"We don’t know who it is, but that person went deep underwater and sabotaged the propeller, so we had to find a different boat," pro-Palestinian activist Feiler said.

Israeli by origins, but residing in Sweden, Feiler is in a group of about 70 people participating in the three ship flotilla set to embark in Gaza.

He told al-Shams that "somebody who knew what they were doing" tried to sabotage the ship which is currently at sea near Crete, and that it is due to arrive in Gaza within three or four days.

Feiler noted that this is not the first attempt to sabotage a boat ready to sail for Gaza while it is at anchor in a Greek port, reflecting on a similar incident that happened in 2011. For this reason, Feilar said, flotilla participants try to spend as little time in Greece as possible.

The Gaza Freedom Flotilla is a name for an organized convoy of ships carrying humanitarian aid to the Gaza Strip through the Israeli-Egyptian blockade. The first flotilla, organized by the Free Gaza Movement and the Turkish Foundation for Human Rights and Freedoms and Humanitarian Relief (İHH), took place in 2010, while the second one followed in 2011.