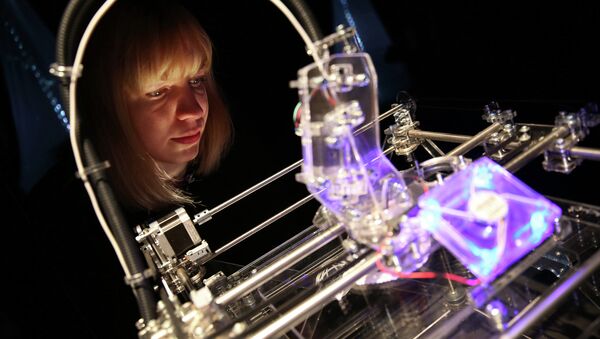 Three-dimensional (3D), or additive printing, is going to transform the US manufacturing, medical technology and aerospace industries, a Government Accountability Office (GAO) Forum on the Future of American Economy concluded.

WASHINGTON (Sputnik) — Forum participants concluded that additive manufacturing “will not replace conventional manufacturing, but rather it will be an additional tool for manufacturers,” the report said.

“[A]dditive manufacturing — also known as three-dimensional (3D) printing [has already produced] benefits that have been realized in the medical, aerospace, and defense sectors,” the forum concluded, according to a GAO report on it released on Wednesday.

The US medical industry is using additive manufacturing to produce customized prosthetics and implants, including cranial implants, according to the report.

Students Hope 3D-Printed Rocket Engine Will Break Records
“Because it is made specifically for a patient, the part results in a better fit, which leads to a better medical outcome,” the report said.

In the aerospace industry, additive manufacturing is already being used to design and produce a complex jet engine fuel nozzle as a single part, which will reduce assembly time and costs for the engine, the GAO Forum noted.

Additive manufacturing has the potential to fundamentally change the production and distribution of goods, the Forum argued.

Already the process is moving to “the direct production of functional parts… such as medical implants or aircraft engine parts — that are ready for distribution and sale,” the GAO concluded.