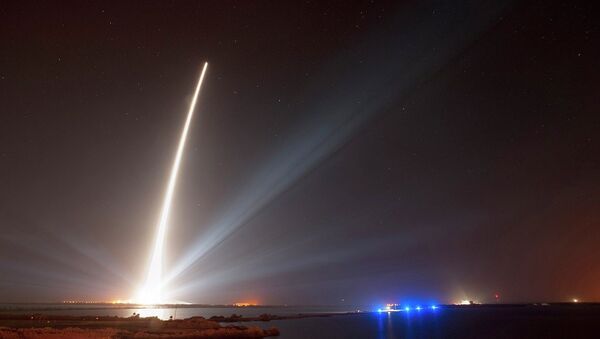 CC0 / /
Subscribe
In its latest saber-rattling move, The Pentagon is ramping up efforts to build an space war headquarters, in order to protect US satellites from hypothetical attacks by Russia and China.

The operations center — which will collect information from US satellites belonging to all government agencies — is slated to open in six months, Deputy Defense Secretary Robert Work told attendees at the annual GEOINT symposium Tuesday.

"[W]e are going to develop the tactics, techniques, procedures, rules of the road that would allow us … to fight the architecture and protect it while it’s under attack," Work said.

"The ugly reality that we must now all face is that if an adversary were able to take space away from us, our ability to project decisive power across transoceanic distances and overmatch adversaries in theaters once we get there … would be critically weakened."

The new ops center will act as a support center for the Joint Space Operations Center at Vandenberg Air Force Base in California, and will coordinate response efforts in the event of an attack.

Calling Russia a "clear and present danger" to the US and warning that China was "quickly closing the technological gap," Work said it was essential for the US to maintain a technological advantage.

In 2013, China launched rockets that the US believe could be used to destroy satellites in Earth's orbit.

Though space has long been considered a "virtual sanctuary," Work said it must now “be considered a contested operational domain in ways that we haven’t had to think about in the past."

In the 2016 US defense and intelligence budgets, approximately $5 billion was shifted to prioritize space security. The budget also included increased requests for navy communications satellites ($21 million, almost double the previous year), space based reconnaissance ($100 million) and funding for Air Force space situational awareness (which more than tripled to $32 million).

But Gen. John Hyten, the head of Air Force Space Command — which comprises 40,000 people managing almost all the Pentagon's space-related programs and all US reconnaissance and communications satellites — said he was having trouble moving the government forward on the issue as quickly as he would like.

"I'm wanting and pulling and looking for those new ideas and trying to change the culture that is really very comfortable with the status quo right now."

000000
Popular comments
Without working rocket engine technology this is all a pipe dream. You think Russia will help the U.S. spy on Russian property by continuing to supply rocket engines?