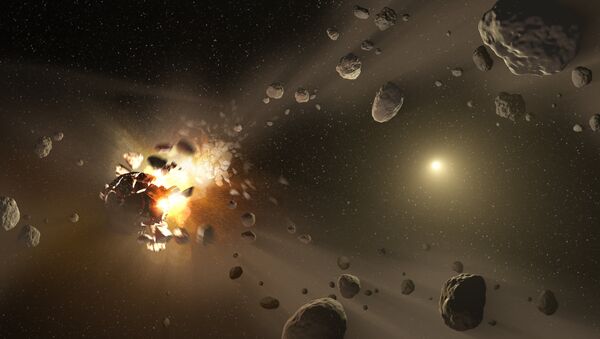 © NASA/JPL
Subscribe
NASA has joined forces with a nuclear arms agency to learn more about how to deflect, or possibly destroy with nuclear power, asteroids or comets that may collide with Earth and obliterate the planet.

Asteroids Probably Delivered Water to Earth, Other Planets
Comets and asteroids are the cosmic rubble left over from the birth of the solar system. Composed primarily of dirty ice, comets are often knocked loose from their home orbits beyond Pluto bringing them closer to Earth and making them unpredictable visitors in our planet’s neighborhood. Asteroids, on the other hand, can easily be detected by astronomers once they are spotted, and mostly travel between Mars and Jupiter.

While small rocky debris routinely rains down on Earth, giant cosmic pieces like the one presumed to have wiped out the dinosaurs often zoom past the planet, posing what many view as a serious extraterrestrial threat.

NASA and the Nuclear Security Administration have separately studied such a potential threat, one that may obliterate entire cities or even the planet as a whole. For years, the two agencies examined cosmic fragments, designed rocket interceptors, and conducted simulated tests to see how asteroids can be veered off their path to Earth.

Last week, the two agencies sealed an agreement to start working together in safeguarding the planet’s survival in the event of an incoming cosmic giant. The goal of their collaboration will be to develop a plan that involves using nuclear weapons to intercept asteroids.

"It’s a big step forward," said Kevin Greenaugh, a senior official at the nuclear security agency. "Whenever you have multiple agencies coming together for the common defense, that’s news."

This isn’t the first time nuclear explosives have been considered as a possible means to deflect incoming asteroids. In 2013, astrophysicist Robert Weaver of the Los Alamos weapons lab in New Mexico, the birthplace of the nuclear bomb, ran simulations on demolishing asteroids with nuclear power. In 2007, NASA scientists detailed plans for an interceptor rocket with a warhead 75 times as powerful as the Hiroshima bomb.

"Often, these agencies focus on their own pieces of the puzzle," said Bruce Betts, director of the nonprofit Planetary Society, "so anything that brings them together is a good thing."

However, many experts believe that nuclear power may not be the most successful method to intercept the cosmic intruders. They believe that nuclear weapons can only be suitable for asteroids or comets that are 164-492 feet in size. Some also suspect that the debris that would result from a nuclear attack would worsen the situation.

"I’d like to see it as a last-ditch option," said H. Jay Melosh, a geophysicist at Purdue University who served on a national panel evaluating extraterrestrial threats in 2010.

The interagency collaboration comes amid rising public and private interest in extraterrestrial threats, and in the cosmic giants floating around in Earth’s neighborhood. The threat of a potential asteroid or comet collision has much more leverage since a 60 foot wide meteoroid – a cosmic rock smaller than an asteroid – exploded over the Russian city of Chelyabinsk in 2013, injuring 1,500 people.

Scientists say that a disastrous collision would occur from an asteroid or comet with a diameter of at least three fifth of a mile. About 1,000 of these objects have been spotted in Earth’s neighborhood, though none pose a collision threat in the near future.  However, scientists warn that many of the million rocks that veer past Earth are untracked, and warrant closer scrutiny.

"The likelihood of something hitting us in the near future is pretty guaranteed," said NASA scientists Jason Kessler, "although we’re not freaking out that there is an imminent threat."