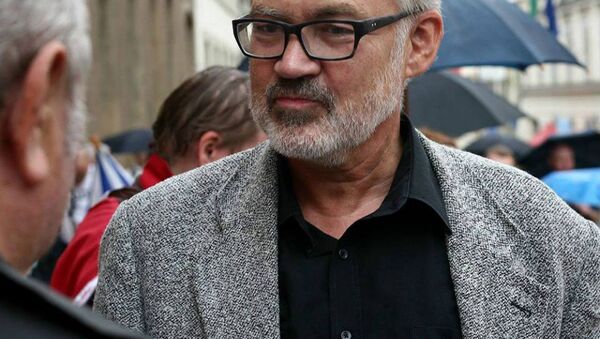 In an interview for Czech political newspaper Parlamentni Listy, veteran Czech politician and analyst Jiri Vyvadil commented on the phenomenon in contemporary global affairs where on one side there are the endlessly naïve positions and policies of many Western politicians, and on the other the reasonable and consistent position of Russia.

Starting off with a commentary on the European refugee crisis, which he said portends to become "the beginning of the mass migration of peoples, of millions of [refugees] moving out of Africa and the Middle East," Vyvadil explained that "the reasons [for the crisis] are clear. Without the wars in Iraq, Afghanistan, Syria and the attack on Libya, Europe would not have faced such a dangerous challenge. It is the West –the US, and from among the European countries France and Britain, who are responsible for the emergence of this chaos."

Cracks Showing in EU as Austria and Hungary Buck Horns Over Migrant Crisis
In this situation, Vyvadil notes that it is extremely arrogant of the leaders of these countries to demand that the other countries of Europe (including the Czech Republic) should pay for their own mistakes. The expert believes that ultimately, Europe as a whole will not be able to come up with a reasonable solution to the crisis, and ultimately, "each country will have to rely primarily on its own resources."

Commenting on Czech Prime Minister Bohuslav Sobotka's recent commentary that Russia could play a role in resolving the conflicts which lead to mass exodus in some African and Asian countries, Vyvadil noted that while he doesn't always agree with Sobotka's commentary on issues relating to Russia, his comments on this issue were dead-on correct. "Certainly Russia, thanks to its long-time co-existence with Muslim populations in the framework of one state, that is, the former Soviet Union, has extensive experience when it comes to both conflict and cooperation with the Islamic World."

Moreover, according to the expert, "if the United States is strongly criticized in many countries, including in Africa, Russia does not preach or admonish, does not dictate, and today is perceived as a kind of military and political leader of the non-Western world, with China serving as the economic leader, of course. I am glad that Sobotka understands the special position of Russia in the world."

Vyvadil believes that "everyone monitoring the situation sees and understands that the world is experiencing a shift of the poles [of political power], and not without clashes and conflict. By this token, the situation over Ukraine stems from the West's desire to inflict a geopolitical defeat on Russia, by initiating a coup d'état, which has resulted in a pro-fascist, socially and economically devastated nation, fighting an endless civil war in its eastern territories. Crimea, which was being prepared for a US military 'super base', was returned to Russia, and Russia itself suddenly turned into the main military-political leader of the intellectual resistance to the United States and the West in the eyes of the non-Western world."

Russia Doesn't Need Membership in 'Tragic Farce' of Contemporary G7
Asked to comment on former Czech President Vaclav Klaus's recent speech before the Valdai Club in St. Petersburg, where he criticized the failures of European liberalism and called for greater cooperation with Russia, Vyvadil noted that like current President Milos Zeman, Klaus "represents the old school of thought of the likes of Schmitt, Schroeder, Kissinger, President d'Estaing –people who understand that it is impossible to create Europe without Russia."

In the veteran social democratic politician's view, "today, Russia is the most important factor for the stabilization of the world. At the moment, nearly all the governments of the West are attempting to punish Russia with sanctions in an environment where their politicians simply do not understand the world in which they live. Russia treats them like a bear which has been overwhelmed by flies, but which does not allow itself to lose its balance. Putin will wait until one [European] leader after another is replaced, and the world will become a different place."