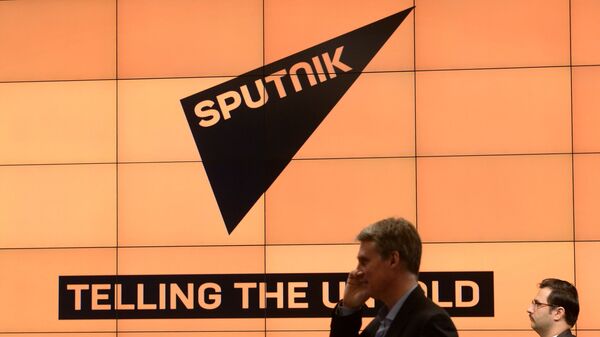 © Sputnik / Alexey Filippov
/
Go to the mediabank
Subscribe
International
India
Africa
Taking a heavy handed swipe against Sputnik and RT, Brussels-based EUobserver touted the European Union's official plans to counter "Russian propaganda," including proposals for tightened regulations against Russian media in Europe, and the establishment of a new EU agency charged with 'promoting EU policy' in the former Soviet space.

The nine-page EU plan, drafted by the EU Foreign Service and seen by EUobserver, talks of Russia's "use and misuse of communication tools," claiming that Russian foreign language media has "played an important role in the dramatic political, economic, and security-related developments" in the EU's "Eastern neighborhood" over the past 18 months.

The paper brazenly notes that Brussels will have to strengthen its work with national regulators, charging "some Russian media, such as RT or Sputnik [with] broadcasting fabrications and hate speech from their bureaus in EU cities."

Chasing Ghosts? Chatham House Uses Cold War Rhetoric in New Russia Report
The plan also calls for the establishment of a new EU Foreign Service cell, called 'East StratComTeam', which will be charged with the "promotion of EU policies" in the former Soviet Union via the creation of "dedicated communication material on priority issues." EUobserver casually states that the agency will be charged with explaining to people in the region "that political and economic reforms promoted by the EU can, over time, have a positive impact on their daily lives," which by definition seems to make it another propaganda tool.

Commenting on Brussels' plans to counter the impact of Russian media, RT Editor-in-Chief Margarita Simonyan told RT in Russian that "the European Union is diligently trying to stifle the alternative voice of RT, at a time when in Europe there are hundreds of newspapers, television channels and radio stations, which set out only one point of view on what is happening in the world."

New Iron Curtain: EU Leaders to Shield Europe From 'Kremlin Propaganda'
Discussing the proposal to establish yet another tool for the EU's media arm, Simonyan recalls that "in Britain an entire army brigade of 1,500 men has been created, whose tasks include the fight against Russia on social networks. NATO has a task force aimed at countering Russian influence throughout the world. Only recently, Deutsche Welle launched a 24-hour television channel in English to counter RT. At the same time, nearly all the major Western media, including the BBC, DW and Euronews have long disseminated their information in the Russian language, while Radio Liberty, funded directly by the US government, [also] broadcasts in Russian."

Ultimately, the journalist notes that "if after all this the EU still complains that they are losing the 'information war' against Russia, perhaps it's time to realize that people are just tired of the one-sided news coverage of the mainstream media."