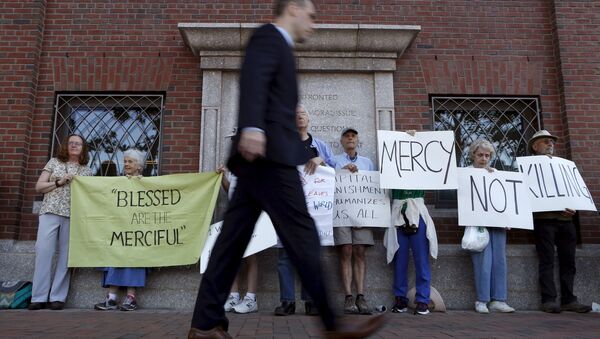 “Why do we kill people who kill people to show that killing people is wrong?” a sign held by one of the protesters outside of the Boston federal court read on Wednesday.

Another sign read, “We gather to mourn the executed, their victims, and the executioners.”

On May 15, a jury found Tsarnaev guilty of all 30 charges against him for his role in the April 2013 Boston Marathon bombing that left three people dead and injured more than 260. They deemed death an appropriate punishment for six of the capital counts against him, including for the use of a weapon of mass destruction and bombing in a public place.

Some of the more than 20 of Tsarnaev’s victims and their family members read tearful statements to the convicted Boston Marathon bomber on Wednesday ahead of the courts formal announcement.

Fun Fact: The Feds Can Charge You for Clearing Your Internet Search History
On Wednesday, Tsarnaev will have an opportunity to speak during the sentencing, which he might use to apologize for his actions, something he has never done publicly. He so far has only expressed remorse through his lawyers.

Tsarnaev has admitted that he and his brother Tamerlan, who was killed in a shootout with police four days after the attack, were responsible for the bombings at the marathon finish line.