EU to Distribute 40,000 Migrants on Voluntary Basis by Late July 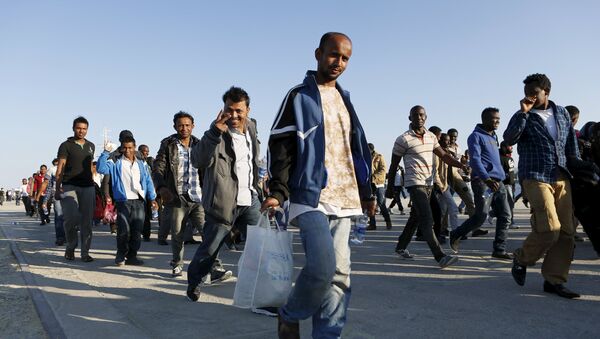 According to a senior EU representative, European Union (EU) will distribute some 40,000 migrants within the bloc on a voluntary basis, not through a proposed mechanism by the European Commission.

EU Commission Insists Member States Will Be Forced to Accept New Migrants
BRUSSELS (Sputnik) – The European Union (EU) will distribute some 40,000 migrants within the bloc on a voluntary basis, not through a proposed mechanism by the European Commission, by the end of July, a senior EU representative told reporters Wednesday.

Last month, the European Commission called on EU member states to take in parts of the 40,000-refugee total from Africa and the Middle East who had landed in Italy and Greece. The EU body laid out a quota plan for refuge adoption that took into account social and economic indicators in the EU member states. Germany, France and Spain would have received the most migrants under the plan.

The quotas caused controversy within the bloc, and at least 12 countries were dissatisfied with the refugee distribution plan, although expressed their readiness to cooperate if it was mandatory, the EU official said on condition of anonymity.

This controversy could be partially resolved during the upcoming EU June 25-26 summit via a voluntary scheme and principles of political will, he added.

According to the official, the ultimate solution could not be expected that soon, as European Council President Donald Tusk offered to make a decision in late July.

According to UN estimates, some 60,000 people have already tried to cross the Mediterranean Sea in 2015, with more than 1,800 dying in an attempt.