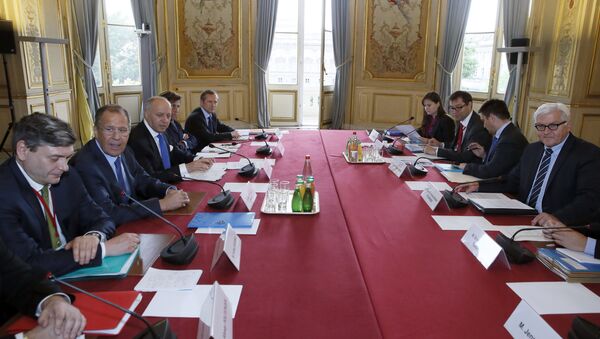 © AFP 2021 / PATRICK KOVARIK
Subscribe
During the meeting of the Normandy group in Paris, Russia’s Foreign Ministry noticed how the microphones were operating "strangely", turning on and off by themselves; the blinking lights caused the diplomats to joke that the US is probably up to its usual tricks again. One however should give it a thought in light of WikiLeaks recent revelations.

White House Denies Targeting Hollande's Communications
“I was watching for three hours yesterday how the microphones of those taking part in the Normandy four meeting spontaneously turned either on or off,” Maria Zakharova, Deputy Director of the Information and Press Department of the Russian Foreign Ministry wrote on her page in Facebook.

“The diplomats joked that the US was up to its tricks once again, though they were meeting in Paris, not in Berlin; the US however might also have all the necessary equipment at hand in Paris.”

French Foreign Minister Laurent Fabius joined in with the laughter, Zakharova noted, as the incident took place before the whistleblower group WikiLeaks released top-secret documents claiming that the US National Security Agency (NSA) has spied on three French presidents and their administrations over the past 10 years.

France Vows to Retaliate Following Revelations That NSA Spied on Hollande
Russia’s Foreign Minister Sergey Lavrov also confirmed that all the microphones were going on and off on their own during the meeting of the foreign ministers of Russia, Ukraine, France and Germany as they tried Tuesday to revive high-end diplomatic efforts to end the conflict in eastern Ukraine.

Asked to comment on the WikiLeaks revelations, the minister said he had not seen the documents but wouldn’t be surprised if they turned out to be genuine.

Zakharova, however, noted that Washington only said that the communications of French President Francois Hollande are not now subject of US surveillance and conveniently remained silent on the monitoring of his two predecessors.

“As if to say sleep well, dear friend, no one's troubling you yet,” she wrote. “Though I wouldn’t be surprised that, right after the “closed” emergency meeting called by President Hollande, Washington will refute its content.” 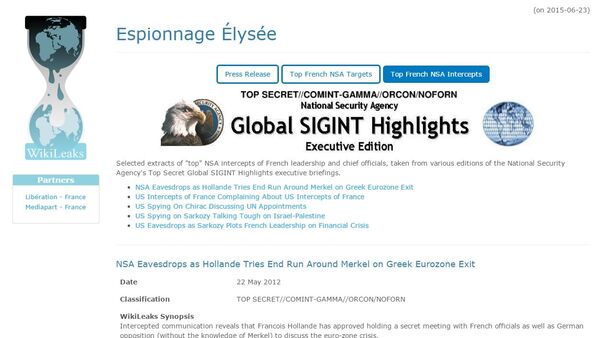 On Tuesday, WikiLeaks revealed top-secret documents claiming that the US National Security Agency wiretapped the conversations of French high-level officials including Presidents Francois Hollande, Nicolas Sarkozy and Jacques Chirac. Among others, they monitored conversations concerning the international financial crisis, the Greek debt situation as well as the future of the European Union.

WikiLeaks Release: NSA Spied on Three French Presidents
National Security Council spokesperson Ned Price later commented on the revelations noting that “they are not targeting and will not target the communications of President Hollande”, saying nothing of the other presidents named.

The leaked documents on the WikiLeaks website however suggest a vast range of NSA eavesdropping. One of the documents, entitled “US Intercepts of France Complaining About US Intercepts of France” suggests that back in March 2010 then-French President Sarkozy was frustrated over “the US desire to continue spying on France” and intended to complain about the issue to the US President “when the two leaders meet in Washington on 31 March.” 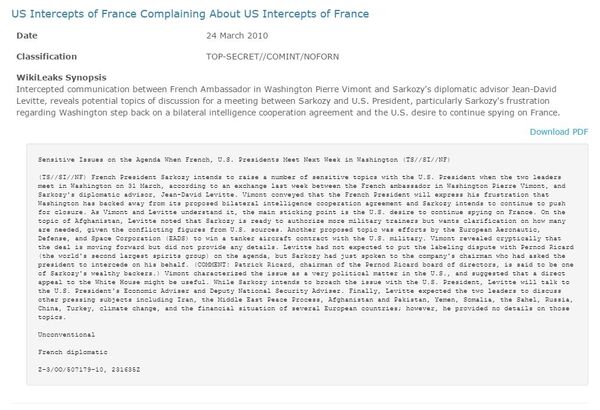 It was previously revealed that the NSA had spied on Germany and that Germany's own BND intelligence agency had cooperated with the NSA to spy on officials and companies elsewhere in Europe.