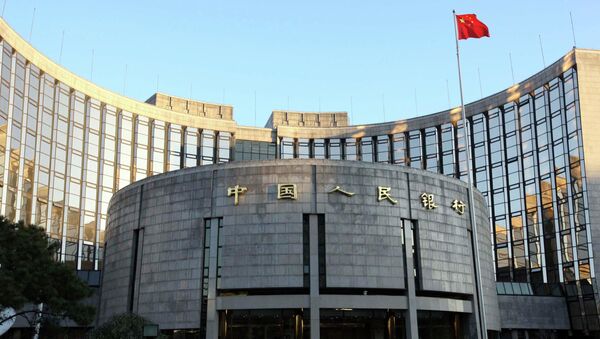 Sino-Russian Rapid Rapprochement Giving Western Financiers the Shivers
Citing the expansion of trade ties, and a slew of fresh energy and finance deals between Moscow and Beijing signed last month, including agreements between the fledgling Eurasian Union and the Chinese Silk Road project, Karahan noted that most the important event was the "outstanding development [of] Russian banks' taking on of Chinese debt in yuan."

In her article, entitled 'Farewell to the US Dollar, Welcome Yuan', the columnist recalled that last October, Moscow and Beijing took important steps "toward realizing their dream – an end of dependency on Western currency," with the countries' central banks reaching a currency swap agreement in order to revive trade in their national currencies. "Soon after, in November, Sberbank, Russia's largest bank, began financing letters of credit in the yuan. Recently, Sberbank has reported that this practice has been successfully implemented, and cooperation with Chinese banks has grown. According to the bank, Russian companies have enthusiastically received contracts based on the yuan, and a new goal is to reach contracts in rubles."

Karahan cites the work of energy giant Gazprom as "the most remarkable example in this sense," noting that "the company dreams of trade without the US dollar to the maximum extent possible. In this context, negotiations are continuing on using the yuan and/or rubles for energy agreements signed with China."

The expert pointed out that even though "the use of the yuan remains less comfortable than the dollar," the fact that Russian government agencies, Gazprom and other Russian companies continue to seek agreement on the currency's use means that they have good reasons for doing so. Karahan places the impact of Western sanctions at the head of the list.

"It is assumed that if the Russian economy, which under sanctions has faced a weakening and decline, turns toward the yuan in place of Western currencies, risks in trade will be reduced," Karahan explains. "An important element here is the ability to maintain stability in the face of growing risks in global markets, especially those related to the policy of the US Federal Reserve. Moreover, it is expected that the use of the yuan will reduce the costs of both parties. It's also worth recalling that China already has experience of bypassing the US dollar and trading in local currencies, in particular, with Japan."

Karahan believes that economics and finance are only part of the equation when it comes to the logic of both Beijing and Moscow, noting that "the long term goal of [both] Russia and China is to unite against US hegemony. One of the pillars of such bilateral cooperation, receiving new impetus toward realization over the past year, is a financial transformation. It is believed that that yuan is a force which has the potential to put an end to the dominance of the dollar over the world."

New Choice: Chinese Currency Expands to Middle East
The columnist notes that at present, about 63 percent of the reserves of national central banks remain denominated in dollars, with the yuan trailing far behind, at around 4 percent of central bank reserves. She is convinced that Beijing's recent actions, in Africa, Asia and most recently with Russia, are aimed at ensuring that China gets "a big piece of this pie, in order to break the hegemony of the dollar."

"Today, China is in a hurry to see the yuan listed in the IMF's Special Drawing Rights (SDR) currency basket. If its ultimate aim is to see the yuan become a reserve currency, this is a very important step. A few weeks ago, an IMF delegation visited Beijing, where it was met with a Chinese report outlining plans for the internationalization of the yuan; China is now impatiently waiting for a reply. If Beijing is able to successfully overcome this critical threshold, central banks around the world may well come to want to add the yuan in their foreign exchange reserves."

All Roads Lead to Turkey: Turkish Media Praises Silk Road
Karahan notes that ultimately, the realization of China's plans and the staking of a claim for power over the world economy will require a great deal of time and effort. "And, even more important is the fact that these plans are not to everyone's liking."

Analyzing the New Silk Road project last week, Karahan expressed her confidence and hope that just as in the ancient times, Turkey must once again come to play a key role in the project to link east and west through trade.