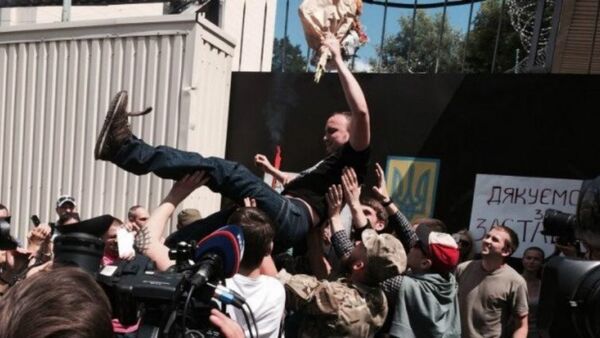 A Kiev court has released Denis Polishchuk, one of the men suspected in the murder of Ukrainian journalist Oles Buzina, on bail, RBK-Ukraina reports, citing the suspect's lawyer.

CyberBerkut: Ukrainian Security Service Involved in Buzina Murder
"He has already been released. He has been given some papers. At the moment we are studying them," Sergei Voichenko, Polishchuk's lawyer, told RBK-Ukraina. The lawyer added that he will do everything in his power to avoid his client's rearrest, stating that his client has no plans to flee the country.

Earlier on Tuesday, an anonymous source put up the nearly 5 million hryvnia bail (equivalent to $232,000 US) for Polishchuk's release. Outside the jail where he was being held, Polishchuk was met with applause and flowers by a group of supporters, who lifted him up and carried him in celebration.

"A suspect in the murder of Oles Buzina has been released, greeted with flowers, and carried in people's arms."

Buzina, who was gunned down near his home this past April by two masked gunmen, was critical of the post-Maidan coup Ukrainian government. His murder was preceded by the killings of several other visible opposition figures, including Donetsk-born journalist Serhiy Sukhobok and politician Oleh Kalashnikov. Dozens of reporters and photojournalists have been killed in Ukraine since the beginning of the conflict in the east of the country, with several more arrested for anti-government views.

In late April, a group of Ukrainian hackers known as CyberBerkut leaked a series of documents allegedly showing Buzina's killers' connections to the Ukrainian Security Service.