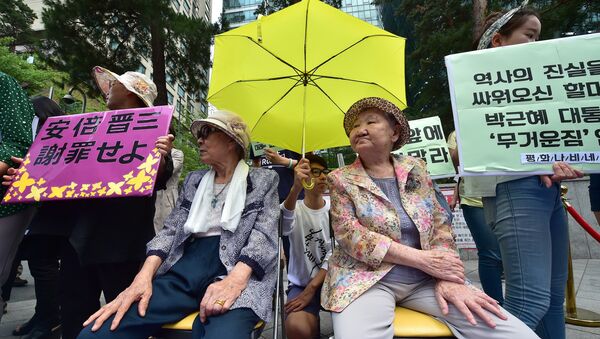 © AFP 2021 / JUNG YEON-JE
Subscribe
Twelve South Korean women who were forced into sex slavery by Japan during World War II will take Tokyo to court in the United States, unless they receive an official apology by the end of June, local media reported Tuesday.

Seoul Urges Japan to Apologize to Korean Sex Slaves
MOSCOW (Sputnik) – According to the Yonhap news agency, the women will launch a civil lawsuit in a California court on July 1, unless Japan shows its desire to make amends for the atrocities.

Each woman plans to seek $2 million for the wartime events and for Japan’s "continued denial of instigating them," Director of the House of Sharing Ahn Shin-kwon told reporters, as quoted by the agency.

The defendants include family members of then-emperor of Japan, Japanese Prime Minister Shinzo Abe, Japanese enterprises accused of enslaving Korean women, as well as Japan’s Sankei Shimbun newspaper, who referred to the women as prostitutes.

Seoul has repeatedly called on Tokyo to address the situation and apologize.

Many of the women forced into sexual slavery by the Imperial Japanese Army during the World War II came from occupied countries such as Korea, China and the Philippines. According to different estimates, between 20,000 and 400,000 were involved in sex slavery. Various survivors’ reports revealed that the so-called comfort women, were often beaten and tortured.

Last August, the United Nations stated that Japan had failed to pursue a comprehensive resolution of the issue of wartime sexual slavery.