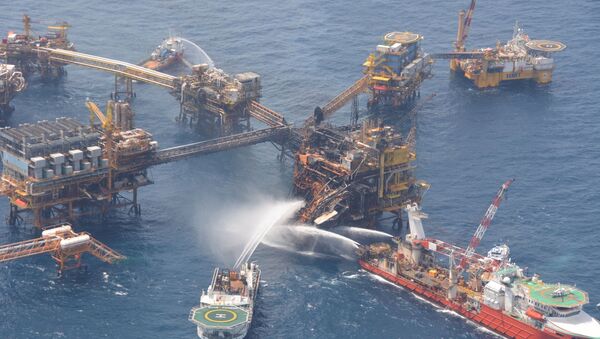 Mexico’s state oil company Petroleos Mexicanos (Pemex) contained an oil and gas leak on Monday that appears to have sparked a fire on its satellite oil platform in the southern Gulf of Mexico.

MEXICO CITY (Sputnik) — The accident occurred shortly after midday local time at the Akal-H platform that belongs to one of Pemex operators, it said in a Twitter posting. The statement said three workers that had been performing routine inspections at the site were promptly evacuated, and no one was hurt.

Local media spoke about an explosion. Pemex did not confirm this in the statement, but indicated there was a fire at the platform that was “immediately put out” by four boats that rushed to the scene.

The company is currently assessing the damage to the facility.

Pemex has already seen two accidents at its offshore oil processing platforms this year that spilled oil into the Gulf of Mexico.