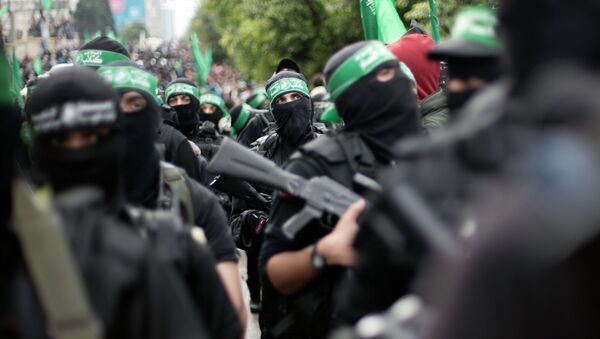 © AP Photo / Khalil Hamra
Subscribe
International
India
Africa
The United States is awaiting the results of an Israeli investigation into incidents during the 2014 conflict in Gaza after the United nations (UN) reveals its report on the war, White House Press Secretary Josh Earnest told a press briefing on Monday.

WASHINGTON (Sputnik) — Earlier on Monday, the UN Independent Commission of Inquiry on the 2014 Gaza Conflict revealed that Israel and Hamas (Islamic Resistance Front) forces committed actions that may prove to be war crimes during the Gaza conflict during summer 2014.

“Israel has undertaken an investigation of incidents from the conflict, and we await their outcomes from the Israeli government on this particular manner.”

UN Finds 'Substantial Information' Pointing to Israel, Hamas War Crimes
In July 2014, Israel launched operation Protective Edge as a response to the kidnapping and murder of three Israeli students. Israel accused Hamas, which controls Gaza, of responsibility for the deaths.

On August 26, the Palestinian Authority, Hamas, Islamic Jihad and Israel agreed to an open-ended ceasefire.

Earnest said the United States continues to support Israel’s right to self-defense, but he also voiced “deep concern about those civilians in Gaza that were in harm’s way.”

According to the UN report,, 2,251 Palestinians were killed during the operation, 1,462 of them civilians. One third of the civilian casualties were children.

The conflict also claimed the lives of six civilians and 67 soldiers in Israel, the study said. At least 1,600 Israelis were reported injured.

The report will be presented at the June 29, 2015 UN Human Rights Council session in Geneva.

Israeli authorities denied access to UN’s Independent Commission to the territories subject to the conflict. Consequently, UN researchers based the report on 280 private interviews and 500 pieces of written evidence.