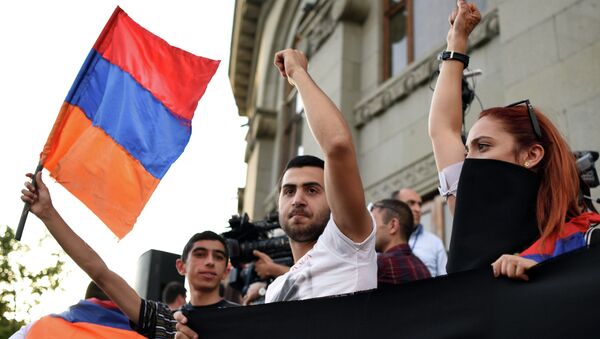 Tensions are running high in Yerevan as some 5,000 protesters took to the streets on Monday to rally against the government’s decision to raise electricity prices for households by 17-22%, according to AFP.

Demonstrators were chanting “No to robbery!” and “Don’t slip your hands into our pockets!” as they marched from Yerevan’s central Freedom Square towards the presidential headquarters, where they were blocked by riot police backed by water cannons.

In response, the protestors organized an improvised sit-in along Baghramyan Avenue.

According to media reports, officials wearing civilian clothing have been trying to force journalists out of the area.

The rally was organized by the No to Plunder group, which has demanded they be allowed free movement through to the presidential headquarters, despite police warnings that the protest march was "unlawful."

President Serzh Sarkisian reportedly agreed to meet with a small group of the demonstrators under the condition that they end the protest, but the offer was declined.

The landlocked country of 3.2 million in the Caucasus mountain region straddling Europe and Asia has suffered severe economic setbacks due to ongoing international disputes involving its neighbors. Protesters accuse President Sarkisian of hiking power tariffs and failing to stem poverty in the nation.