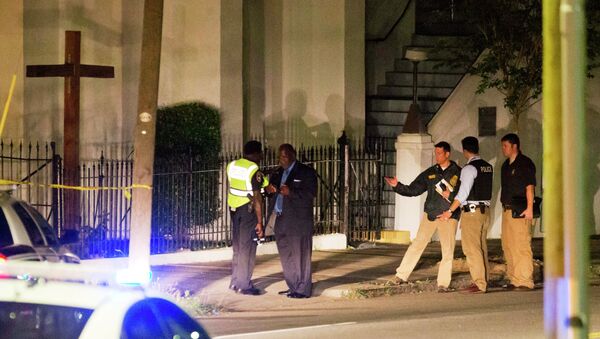 © AP Photo / David Goldman
Subscribe
The Department of Homeland Security released a report in 2009 about Rightwing Domestic Extremism but because of the pressure from the Right Wing Party, the Obama administration was forced to retreat it. Brad Friedman in his broadcast explains how today the situation in US is what the report had predicted years ago.

The Department of Homeland Security released a report in 2009 about Rightwing Domestic Extremism. It warned about the reemergence of potentially violent extremist groups who would reject government authority, escalating domestic violence in the country.

Rightwing Domestic Terrorism and Beyond; Repubs Ban Fracking Bans
Brad Friedman in his BradCast for Sputnik radio talks about how the US government concealed a report which was published back in 2009. In the report officials warned that right-wing extremists could use the bad state of the US economy and the election of a Democratic president to recruit new members to their cause.

“This report caused the ‘right’ in America — FOX News, Rush Limbaugh and therefore the Republican Party to go nuts. They were so upset about the report that they bullied the Obama administration to retract the report.”

Brad Friedman elaborates on how the report’s predictions are coming true today as the US faces more threats from the right-wing extremists than Muslim terrorists. But for some reason the US governors, some of whom are up for the presidential election, are in total denial.

The recent attack on the AME Church in Charleston is an example of what the 2009 report predicted.

“In their speeches post the recent Charleston attack on a church, these leaders do not use the word ‘terrorism’ for such lone-wolf crimes and do not mention that this attack was aimed at killing black Americans.”

“Since 9/11 an average of 9 Muslim Americans per year have been involved in an average of 6 terrorism plots against targets in the US. In contrast, right-wing extremists average 337 attacks per year in the decade since 9/11 causing 254 fatalities.”

Friedman stresses that Right-wing extremism is the leading source of ideological violence in America today.

000000
Popular comments
Again, more propaganda. "You might be a terrorist if...." You belong to the NRA You are a veteran You are a animal rights activist. You are a home schooler. You are a 'prepper' You belong to the Tea Party. You own a motorcycle. You are a fundamentalist Christian. You are a constitutionalist You are a 'patriot'. You supported the Bundies. You are anything other than a Marxist left leaning liberal, hardly anyone is safe form being labled! And again, Police have brutalized and killed far more innocents than the drug addled, MKULTRA mass shooters and 'terrorists' combined.
White_Eagle1
12 July 2015, 04:41 GMT
000000
Newsfeed
0
New firstOld first
loader
LIVE
Заголовок открываемого материала
Access to the chat has been blocked for violating the rules . You will be able to participate again through:∞. If you do not agree with the blocking, please use the feedback form
The discussion is closed. You can participate in the discussion within 24 hours after the publication of the article.
To participate in the discussion
log in or register
loader
Chats
Заголовок открываемого материала
Worldwide
InternationalEnglishEnglishMundoEspañolSpanish
Europe
DeutschlandDeutschGermanFranceFrançaisFrenchΕλλάδαΕλληνικάGreekItaliaItalianoItalianČeská republikaČeštinaCzechPolskaPolskiPolishСрбиjаСрпскиSerbianLatvijaLatviešuLatvianLietuvaLietuviųLithuanianMoldovaMoldoveneascăMoldavianБеларусьБеларускiBelarusian
Transcaucasia
ԱրմենիաՀայերենArmenianАҧсныАҧсышәалаAbkhazХуссар ИрыстонИронауОssetianსაქართველოქართულიGeorgianAzərbaycanАzərbaycancaAzerbaijani
Middle East
Sputnik عربيArabicArabicTürkiyeTürkçeTurkishSputnik ایرانPersianPersianSputnik افغانستانDariDari
Central Asia
ҚазақстанҚазақ тіліKazakhКыргызстанКыргызчаKyrgyzOʻzbekistonЎзбекчаUzbekТоҷикистонТоҷикӣTajik
East & Southeast Asia
Việt NamTiếng ViệtVietnamese日本日本語Japanese俄罗斯卫星通讯社中文（简体）Chinese (simplified)俄罗斯卫星通讯社中文（繁体）Chinese (traditional)
South America
BrasilPortuguêsPortuguese
NewsfeedBreaking
14:20 GMTSpanish Canary Island of La Palma Rocked by Volcanic Eruption - Videos
14:12 GMTFrance Denies Cancelling Summit With Swiss President Over Jet Ordering Debacle
13:41 GMTTwo Libyan Helicopters of Haftar's LNA Collide at Drills Near Benghazi, 2 Killed,Source Says
13:40 GMT'Two Steps Forward': Pele's Daughter Shares Details on Iconic Player's Condition After Surgery
13:35 GMTSafety First! US Reportedly Frees Daesh Fighters From Prison in Syria, Jabs Them With Covid Vaccines
13:31 GMTDonald Trump's Hollywood Walk of Fame Star 'Gets Smeared in Dog Poop'
13:00 GMTNot Toys, But Collector's Items: Bavarian Business Rolls Out 'Merkel Teddy Bear'
12:46 GMTTehran Threatens to Expand Strikes Against Terrorists in Northern Iraq, Demands Closure of US Base
12:43 GMTIsraeli US Envoy Slams Ocasio-Cortez for Bid to Block Sale of Precision-Guided Munitions to Tel Aviv
12:29 GMTPrince Harry Reveals What Grandfather Philip Told Him Before Afghanistan Military Trip
12:01 GMTNew Tropical Storm Raging Over Atlantic, US National Hurricane Center Says
11:58 GMTMacron, Biden to Speak in Coming Days After France Loses Defence Contract With Australia
11:57 GMTMan United Boss Ole Gunnar Solskjaer Hits Back at Rio Ferdinand Over Cristiano Ronaldo Comments
11:51 GMTErdogan Plans to Meet With Greek Prime Minister During Visit to US
11:31 GMT‘Ah Yes, the USAF Su-27 Fleet’: Users ROFL Over Russian Jets in Tweet Marking US Air Force’s B-Day
11:28 GMTNew Blast in Afghanistan's Jalalabad Kills 2
11:27 GMTHealthcare in Lebanon Facing Collapse Amid Fuel Shortages, Brain Drain, WHO Chief Says
11:03 GMTPrince Andrew 'May Visit Pregnant Daughter' at London Hospital Amid Impending Sex Abuse Lawsuit
10:45 GMTLancet Letter Urges 'Objective Debate' on COVID Origins, Says Lab-Related Accident 'Plausible'
10:40 GMTShamima Begum Claims She'll Help Fight Terrorism in UK but Won't Name Brits Who Joined Daesh: Report