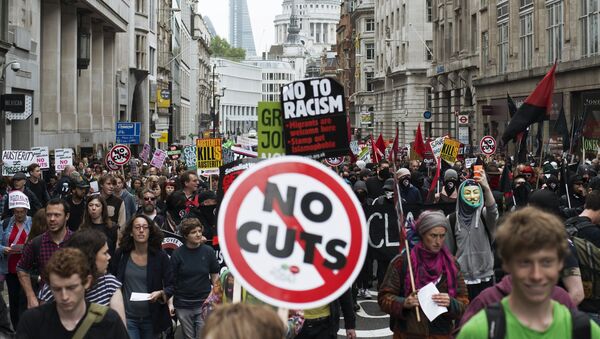 The government of the United Kingdom, led by David Cameron, will proceed with unpopular welfare cuts amounting to 12 billion pounds (about $19.1 billion), Chancellor of the Exchequer George Osborne and Work and Pensions Secretary Iain Duncan Smith said in an article published in the Sunday Times.

MOSCOW (Sputnik) — The announcement comes a day after some 250,000 people, according to the local biggest trade union Unite, took to the streets of London in a protest against spending cuts imposed by the previous coalition government and further measures proposed by Osborne.

“This government was elected with a mandate to implement further savings from the £220bn welfare budget,” the ministers said.

The ministers stressed that welfare spending in the past spiraled out of control, and now “it’s a project of a decade or more to return the system to sanity.”

“We will set out in detail all the steps we will take to bring about savings totalling £12bn a year in next month’s budget and at the spending review in the autumn,” the ministers added.