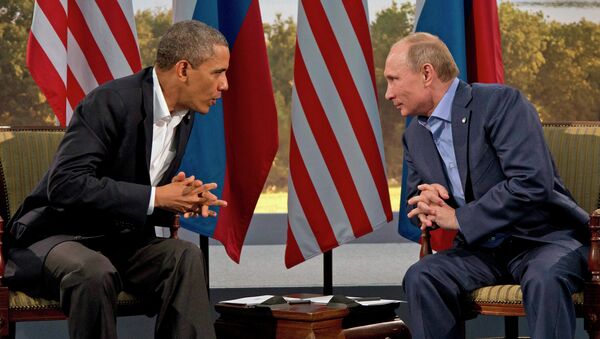 © AP Photo / Evan Vucci, File
Subscribe
International
India
Africa
US writer Stephen Lendman compared the leaders of Russia and the US, delivering an uncheerful verdict for Barack Obama: Vladimir Putin is an outspoken man of action, while the US president is essentially "a serial liar."

"Putin says what he means and means what he says. His style is forthright. He follows through on what he says," the US activist and a radio host said. "Obama is a polar opposite – an inveterate serial liar with no credibility whatever. He says one thing and does another," he added.

World
US Political Analyst Slams Obama's Foreign Policy as Too Hawkish
The list of Obama's transgressions as narrated by Lendman knows no end. But in short, the US president is all for talking the talk but he never actually walks the walk.

Obama often speaks about Muslims, their rights and wellbeing. If the US president were a man of his word, he would immediately end all wars in the Middle East, stop destabilizing countries in the region and "persecuting Islamic people at home and abroad."

Lendman also urged Obama to "end the charade about a so-called Iranian nuclear weapons program that the whole world knows doesn't exist." Tehran has spent years convincing the West that its nuclear ambitions are peaceful in their nature and do not have an ulterior military motive.

The writer does not leave the so-called "color revolutions" and the Arab Spring without a mention. If Obama held the peace and prosperity of other nations at heart, he would "stop pursuing regime change in one independent country after another."

The US president likes to engage in human rights rhetoric, but US intelligence agencies are still involved in mass surveillance uncovered by former CIA and NSA contractor Edward Snowden.

Obama would "end Big Brother spying on everyone without just cause" but he does not.

Putin: Russia Rules Out Hegemony, Seeks Int'l Relations Based on Equality
During the St. Petersburg International Economic Forum, Vladimir Putin blankly and justifiably said that Washington was pursuing a second installment of the bipolar confrontation, the Cold War 2.0.

US actions once against speak louder than words. Take Washington's decision to withdraw from the AMB Treaty in 2002. Instead of upholding a bilateral regime limiting the anti-ballistic missile systems, the US has immersed itself in developing and expanding ABMs in Central and Eastern Europe.

"Local military conflicts do not lead to the Cold War, but global decisions do, such as the US unilateral exit from the Anti-Ballistic Missile [ABM] Treaty. This really is a step which pushes us towards the new round of arms, as it changes the global security system," the Russian president said.

Vladimir Putin also accused the United States of trying to impose its standards on Russia not taking Russia's interests, history or culture into account. He also blamed Washington "irresponsibly meddling in Russia's internal affairs, which is the same way Washington operates globally, a nuclear-armed bully throwing its weight around."

Lendman bluntly stated that "lunatics" are making decisions in the United States and as long as this remains unchanged a confrontation between the East and the West is possible. In fact, the possibility of this now "is greater than any time during the Cold War."