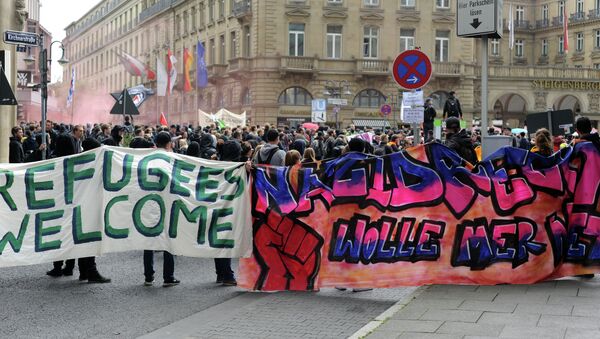 Some 2,000 people took to streets of the German city of Frankfurt to protest against a demonstration held by anti-Islamization Pegida movement, local media reported.

Several thousand police officers were deployed in the area ahead of the demonstrations but the measure could not prevent clashes between the opposing groups, according to the news outlet. Some activists and law enforcement representatives sustained injures, the police reported, adding that they arrested several protesters.

PICTURE — Riot police and Water canon at the ready in #Frankfurt where Anti-fa protest blocks a far right rally pic.twitter.com/ExHAPff0Yv

Pegida is a Dresden-based political movement that has been organizing actions against immigration and what they refer to as "Islamization" of Europe since October 2014. The movement has inspired series of anti-immigration protests in other Western countries.

Every Pegida meeting is accompanied by the meeting of its opponents, who support multiculturalism and welcome migration.