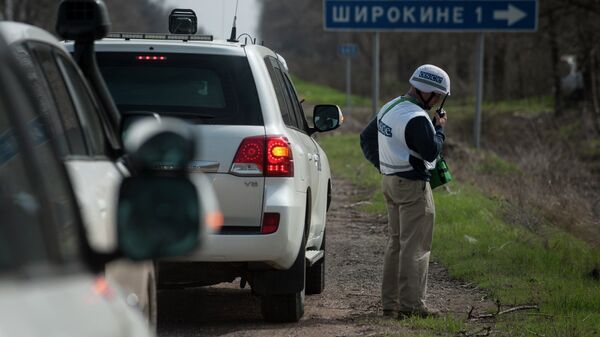 OSCE observers have reported artillery fire in the Donetsk airport area amid a ceasefire between Kiev forces and independence fighters of the southeast.

MOSCOW (Sputnik) – Observers from the Organization for Security and Co-operation in Europe (OSCE) working in Ukraine have reported artillery fire in the Donetsk airport area amid a ceasefire between Kiev forces and independence fighters of the southeast.

"In the area around Donetsk airport, the SMM [Special Monitoring Mission] observed more ceasefire violations than in recent days," the OSCE monitors said in a Saturday report, adding that on Friday afternoon the SMM observed "144 incoming and outgoing explosions, consistent with mortar and artillery fire, whilst at the Donetsk railway station."

In the Donetsk city, the OSCE observed a fuel shortage, with many gas stations being closed due to a lack of supply.

Right Sector Muscles OSCE Monitors Out of Occupied Communist Headquarters
The OSCE also said that the situation has been tense in Shirokino (Shyrokyne), a village located in Ukraine’s southeastern region of Donetsk.

"From observation points just west of the town, the SMM saw and heard various explosions, outgoing and incoming mortar fire, as well as small-arms fire in the Shyrokyne area," the OSCE report said.

Shirokino was considered neutral territory in the internal armed conflict that started in Ukraine’s southeast in April, 2014, when Kiev launched a military operation against Donetsk and Lugansk independence supporters.

At the beginning of 2015 fighting in Ukraine’s southeast intensified, with the Donetsk Airport and Shirokino being one of the hotspots of violence.

At the start of February, Shirokino was seized by Kiev forces.

In mid-February, Kiev and the self-proclaimed people’s republics of Lugansk and Donetsk (LPR and DPR) signed a ceasefire agreement after talks in the Belarusian capital, Minsk. However, both sides have since repeatedly accused each other of violating the deal.