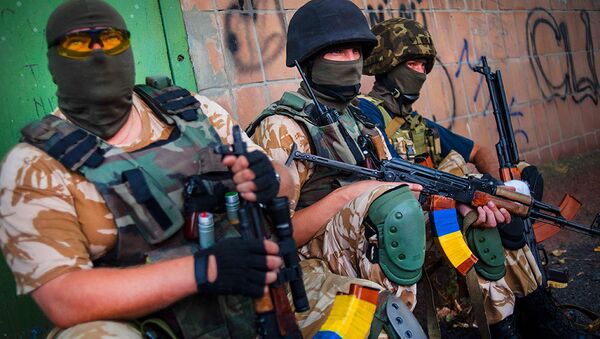 On Thursday, Ukrainian Interior Minister Arsen Avakov announced that he had signed an order to dissolve the Tornado battalion, charging some of its fighters with criminal activity. The move came after Lugansk governor Hennadiy Moskal called on Kiev to disarm the unit accusing it of illegal train cargo seizure.

Tornado members responded to the order by mining the territory around their base in the city of Severodonetsk in the Lugansk region. Around 170 fighters blocked off the path to the base and threatened to open fire on government troops, while Tsukur said the fighters were waiting for job offers from the Interior Ministry.

Tornado Commander Ruslan Onishchenko was arrested on Wednesday along with seven of his men.

Onishchenko, who has several convictions for crimes including robbery, kidnapping and extortion, is now suspected of creating a gang that committed numerous crimes between January and March 2015, according to Ukrainian Chief Military Prosecutor Anatoly Matios. The crimes allegedly include at least one gang rape of a man carried out by Torando battalion members and captured on video.

Ukraine’s volunteer battalions, including Donbas, Azov and Dnipr were set up following the start of Kiev's military operation in the Donetsk and Lugansk regions in April, 2014. In November, the volunteer divisions, far-right in their ideologies, were put under the command of the Ukrainian Army.

A number of humanitarian organizations, including Amnesty International, have stressed that the Ukrainian government is responsible for the war crimes and human rights abuses committed by volunteer battalions in southeastern Ukraine.