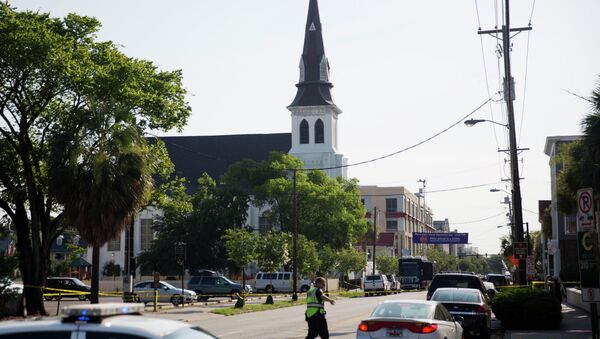 © AP Photo / David Goldman
Subscribe
The horrific gun massacre at the historic African Methodist Episcopal Church in Charleston left nine people dead. Amid continued gun crimes in the US, the host of radio Sputnik’s BradCast show talks about the gun laws in the US and calls the lawmakers ‘insane’.

The latest news out of Charleston, South Carolina after Wednesday night's horrific gun massacre at the historic African Methodist Episcopal Church is that the suspected gunman has now been apprehended.

The host of radio Sputnik’s BradCast show talks about the deadly gun massacre in Charleston, South Carolina, where a young white man shot nine people in cold blood inside a church.

“A young white man joined a prayer meeting inside a historic black church in South Carolina on Wednesday night and then fatally shot nine people. After an all-night hunt, he was captured without resistance on Thursday.”

An Evangelical Response to the Pope's Landmark Climate Change Encyclical
The host Brad Friedman also noted that “Dylann Roof, 21, spent nearly an hour inside the church on Wednesday night before killing six women and three men, including the pastor, according to Charleston police Chief Greg Mullen.”

The stunned community members and political leaders condemned the attack at the African Methodist Episcopal Church.

“Police are treating the killings at the Emanuel AME Church on Wednesday night in South Carolina as a hate crime.”

“Three people survived the shooting and according to one survivor she received a chilling message from the shooter, her life was spared so that she could tell them what happened.”

“The only reason why someone would walk into a church and kill those who are praying is hate,” according to South Carolina’s department of justice chief.

A statement from the spokesperson of the Bradey Center and Campaign to Prevent Gun Violence said that “the facts of this apparent hate crime remain under investigation and there is still a lot that we don’t know. What we do know is that every day 88 lives are lost in shootings across our nation. Most of these tragedies are preventable.”

Charleston Shooter to be Held Without Bond on Murder Charges
The host of radio Sputnik’s program played a clip from President Barack Obama’s interview in which he said that soon the gun laws will need to be changed in order to prevent such massacres from happening.

Brad Friedman together with producer Desi Doyen discussed what to make of the President’s comments exactly.

Friedman went on to say that US gun laws are clearly insane, as despite a number of repetitive crimes, the laws have not yet changed. “The facts and the data speak for itself when we have that data; Congress has passed laws to keep data to themselves.”