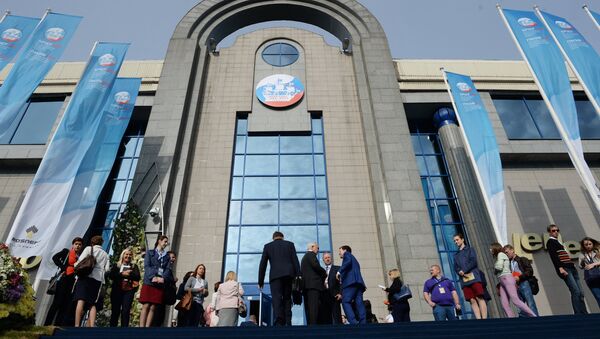 US Companies Remain Interested in Business With Russia
ST.PETERSBURG (Sputnik) — A total of 205 agreements, memorandums and contracts have been signed in the course of the three-day summit in St. Petersburg, said Kobyakov, who is also an adviser to the Russian president.

The number of participants in the forum was unprecedented, about 10,000, Kobyakov said, summarizing the event’s results.

He also highlighted that approximately 200 foreign businesses' CEOs had attended the forum and all of the invited accepted the invitation extended earlier.

Russian and Greek Energy Ministers, Alexander Novak and Panagiotis Lafazanis respectively, signed a memorandum on the construction of the extension of the Turkish Stream gas pipeline to deliver fuel to Europe on Friday. Moreover, Russian energy giant Gazprom announced Thursday that it was intending to construct a double pipeline from Russia to Germany through the Baltic Sea with E.ON, Shell and OMV.

Asia
Large Russia-China Investment Projects Inked at St. Petersburg Forum
According to Kobyakov, the program of the forum was "unique in its scope and subjects since it encompassed more than 150 events," such as summits, panel discussions, round-tables, briefings and televised debates.

Panel sessions of the BRICS and the Shanghai Cooperation Organization (SCO) business forums, the Valdai International Discussion Club of Russian and foreign experts as well as the Business Twenty (B20) Regional Consultation Forum were among the events held during the SPIEF, he added.