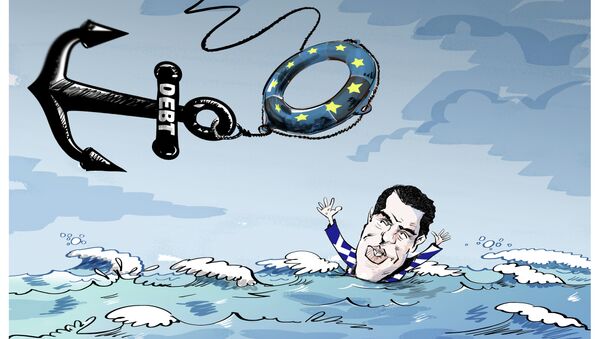 More and more people in Greece think that country's exit from the eurozone, compared to the social pain of maintaining austerity policies, is a better option.

For example, the country's ruling Syriza party lawmaker and Chairman of Committee on Economic Affairs, Stefanos Samoilis told Sputnik Turkey that a potential Greek exit from the eurozone would be much more painful for the European monetary union than for Athens.

Addressing the assertion that a Grexit would be suicidal for the country, Samoilis said, "I don't agree with this view. I don’t think anything other than the continuation of austerity policies is suicidal for Greece."

If Greece's creditors insist on unsustainable policies bringing more people to the brink of poverty, the government will explore other options and "democratically decide which way to go forward," Samoilis added.

There has been broad media speculation regarding Greece’s potential exit from the eurozone in recent weeks. Several Greek officials, including Finance Minister Yanis Varoufakis, have spoken out against Athens leaving the single currency.