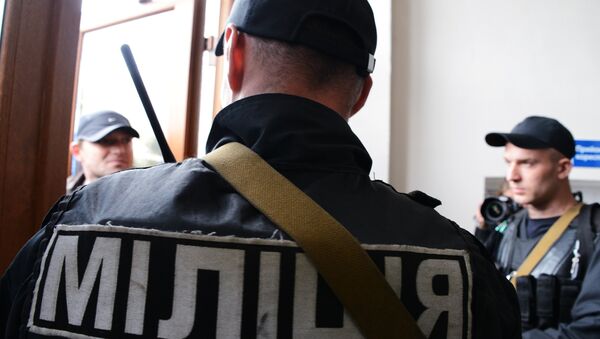 © Sputnik / Natalia Seliverstova
/
Go to the mediabank
Subscribe
International
India
Africa
A drone was used to prevent any massive military actions and to disarm the Tornado battalion which was dissolved by the Ukrainian Interior Ministry. The UAV came under fire near the battalion base in the city of Severodonetsk, according to Military Prosecutor Anatoly Matios.

According to him, the order to attack was issued by Battalion Commander Nikolai Tsukur.

"A UAV of the Interior Ministry was used in order to prevent massive military actions and to disarm the battalion which was dissolved by the ministry. The drone was shot from the base just one hour ago," Matios said.

On Thursday, Ukrainian Interior Minister Arsen Avakov told media that he signed an order to dissolve the Tornado battalion, charging some of its fighters with criminal activity.

Earlier Thursday, Lugansk governor Hennady Moskal called on Kiev to disarm the Tornado and Chernigov battalions, accusing them on numerous crimes.
Tornado members responded to the order by mining the territory around their base in the city of Severodonetsk, in Lugansk region. Around 170 fighters blocked off the path to the base and threatened to open fire on government troops.

Ukrainian Volunteer Battalion Mines Base, Threatens to Fire on Gov't Forces
Meanwhile, one of battalion fighters said the unit was ready to lay down arms and would not resist to disarmament. He also called for a public investigation into the reasons of Tornado’s dissolution.

"This is not to say that we barricaded ourselves because we are in the zone of the conflict and we are taking our positions. We are aware of Avakov’s order to dissolve the battalion. We will lay down arms within a month. We will not disobey the order, but we want a public investigation into the charges we are facing," said a fighter whose nom de guerre is Okhotnik (Hunter).

Battalion Commander Nikolai Tsukur, in his turn, said its fighters are waiting for job offers from the Interior Ministry.

"We should be offered other jobs. We need to make inventory of our weapons and conduct some personnel management," he said.

He also underscored that according to the law, dissolution of a battalion usually takes two months.

On Wednesday, Ukrainian media reported that the Ministry of Internal Affairs arrested Tornado commander Ruslan Onischenko and seven other fighters from the battalion for violent crimes, including murder, rape, assault, kidnapping and looting, recording much of them on video.

Ukrainian Neo-Nazis Strike Back: Azov Battalion Bashes US Congress
Following the notorious Azov battalion, Tornado has become another Ukrainian battalion at the center of a scandal.

"Checks must be carried out by the Interior Ministry to find out how recidivist criminals came into positions of leadership and received weapons from the state and the status of police officers, while continuing to commit crimes on the territories they were tasked with patrolling," Matios said.