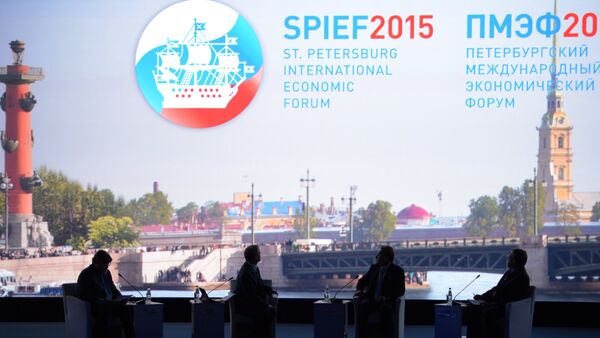 © Sputnik / Alexei Danichev
/
Go to the photo bank
Subscribe
Speaking to Sputnik, former Italian Foreign Minister Franco Frattini stated that he sees the opening of the St. Petersburg International Economic Forum as an opportunity to reestablish dialogue between Russia and the West, adding that he will use the occasion to note that in a globalized world economy, Russia's isolation is an impossibility.

Frattini, who currently serves as the President of the Italian Society for International Organizations, noted that he would "very much like to see" the Forum to be used as an opportunity for dialogue between Russia and the West.

The official noted that, for his part, he will use his speech to "point out that in the age of economic globalization, in the age of all sorts of challenges and risks, it is impossible to imagine a return to the strategy of the economic blockade, just as it impossible to imagine Russia's isolation. I believe that we cannot afford to lose Russia as a strategic partner. After all, the world economy requires cooperation, openness and accessibility between partner nations, and the development of trade relations. The global economy and political cooperation are closely linked to one another."

Western Sanctions Against Russia May Be Extended 'Far Longer' Than 6 Months
Commenting on Western-Russian 'war of sanctions' which has unfolded over the past year-and-a-half, Frattini noted that for Europe, the policy "is just a suicidal one; Europe suffers considerable economic losses from the sanctions policy." Furthermore, the official noted that "it is obvious that our American colleagues are much less affected by these policies, since they trade with Russia much less than Europe does."

In Frattini's view, "sanctions will not be able to dispel concerns held by the European Union's eastern members, including Poland and the Baltic states." Instead, along with a reconsideration of sanctions policy, "it would be worth beginning the development of a new agreement on association and agreement between Europe and Russia, which had been postponed. Such an agreement already exists, but has lost its value and should be replaced. Negotiations on the creation of a new agreement between Europe and Moscow have been suspended. The Forum is a good opportunity for their resumption."

The politician noted that even though the parties involved may have divergent interests and views, the negotiations themselves would send a positive signal. "Naturally, in such negotiations, each party will defend its own interests. But it would be a signal that we want to turn to an atmosphere of cooperation, instead of one of confrontation."

Frattini noted that agreement depends first and foremost on adherence to the Minsk Agreement. "From the Russian side, we expect that the Minsk Agreement on the future of the eastern regions of Ukraine will be fully respected, just as they should be respected by the Ukrainian side. When there is an agreement, it must be complied with by both sides. Unfortunately, the actions taken by Kiev which have resulted in numerous casualties among the civilian population in the eastern regions of the country have not yet seen a proper investigation. All of these issues should be dealt with together."

Investors Interested in Russian Economy Despite Geopolitical Tension
Franco Frattini served as foreign minister in Prime Minister Silvio Berlusconi's governments between 2002-2004, and from 2008-2011, serving as European Commissioner for Justice, Freedom and Security between 2004-2008.