Le Monde Warns UK: Brexit Could Be Your Waterloo 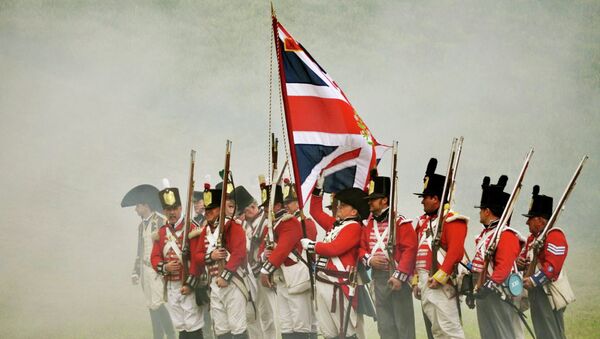 © Flickr / Antonio Cinotti
Subscribe
International
India
Africa
200 years after Wellington defeated Napoleon at the battle of Waterloo, the leading French newspaper Le Monde has taken the unprecedented action of publishing an editorial written in English imploring the UK to remain within the European Union.

UK Prime Minister David Cameron came to power in the May 2015 elections on a promise of an In-Out referendum on the nation's continued membership of a reformed European Union, amid growing Euroscepticism.

On the anniversary of the battle of Waterloo, in which a French army under the command of Napoleon was defeated by the armies of the Seventh Coalition, under the command of the British Duke of Wellington and a Prussian army under Gebhard von Blücher, the French newspaper has held out an olive branch to its cross-Channel neighbor.

"After two hundred years, the time has come to take a fresh look at the meaning of Waterloo. Defeat does not come easily to a proud nation. On June 18th, 1815, France did not only lose thousands of its brave soldiers on the gory fields of Belgium. It lost an Emperor, whom the English then took into permanent exile on the desolate island of St Helena; it also lost its dream of hegemony," the editorial began.

The paper used the bicentenary of the battle to remind its British counterparts that June 18 is also the anniversary of the day when the exiled General de Gaulle launched his appeal from London in 1940, calling his fellow countrymen to resist the German occupation.

"Your Future is in Europe"

In World War II, de Gaulle had learned that Marshal Pétain had become prime minister and was planning to seek an armistice with Nazi Germany. De Gaulle and other officers rebelled against the new French government and, on the morning of 17 June, fled to London. De Gaulle's appeal of June 18 exhorted the French people not to be demoralized and to continue to resist the occupation of France.

"More importantly," the editorial continued, "Waterloo marked the end of the political cycle of the French Revolution and the beginning of the industrial revolution in Britain. For the next century, no major European war would erupt. After the Congress of Vienna, European monarchs took to meet regularly to solve tensions and crises: a new system of collective security had emerged."

The paper said that lasting peace had been achieved within Europe and that Paris-London ties ran deep. The two countries in 2010 signed the Lancaster House Treaties on defense and security cooperation as well as industrial and nuclear co-operation.

"We feel entitled to call on our British allies to resist the familiar temptation of splendid isolation."

"The country which cornered Napoleon cannot succumb to [anti-EU party UKIP leader] Nigel Farage. Today, we solemnly say to our friends across the Channel: beware, Brexit could be your Waterloo! And to make sure the message is really heard, we have gone as far as to convey it in English. Messieurs les Anglais, don't let the sirens of a fake independence pull you away from the continent. Just as in 1815, your future is in Europe."