All Roads Lead to Rome: Could Italy Resolve the Ukraine Crisis? 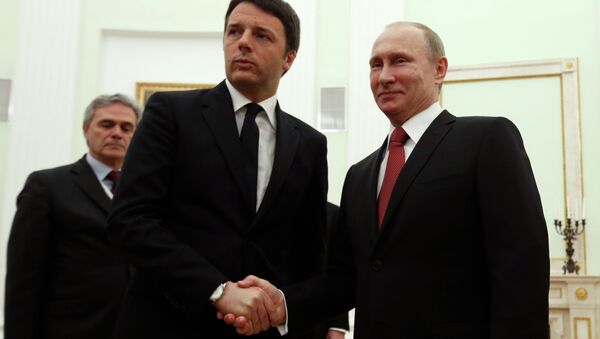 © AP Photo
Subscribe
International
India
Africa
Italy has poised itself to be the catalyst that could resolve the crisis over Ukraine, following the meeting between Russian President Vladimir Putin and Italian Prime Minister Matteo Renzi, which Putin described as "productive".

The meeting followed a visit by Renzi to the White House, where he held talks with US President Barack Obama which resulted in what observers describe as a shift in Italy's foreign policy.

Obama and Renzi held talks in the Oval Office on April 17 over Italy's position on western sanctions on Russia linked to the crisis in Ukraine.

Renzi is understood to have said Italy would not break with the western line on sanctions against Russia, but at the same time intended to pursue a deeper relationship with Moscow.

According to La Stampa newspaper, the foundations for Italy's thaw with Russia were first laid out during Renzi's March 5 talks with Putin in Moscow, more than a month before the White House meeting.

Renzi's trip to Moscow marked the first official visit by a western leader to Russia since the Crimea referendum and suggested that Italy's foreign policy was going to stray from its European allies. Renzi and Putin spoke for more than three hours, signifying how strongly the two leaders sought to build their personal relationship.

Last week, Putin visited Rome where he and Renzi discussed the issue of anti-Russian sanctions imposed by the West during their talks. According to the Russian president, Italian companies lost over $1 billion due to sanctions. Russia and Italy also called for the full implementation of the Minsk agreements on Ukrainian reconciliation, and affirmed their commitment to a peaceful solution to the conflict.

US attempt to ‘lecture the Pope’ before Putin meeting a ‘big responsibility’ to take – Kremlin — http://t.co/3inazdYLMZ VÍA @AlfredoJalifeR_