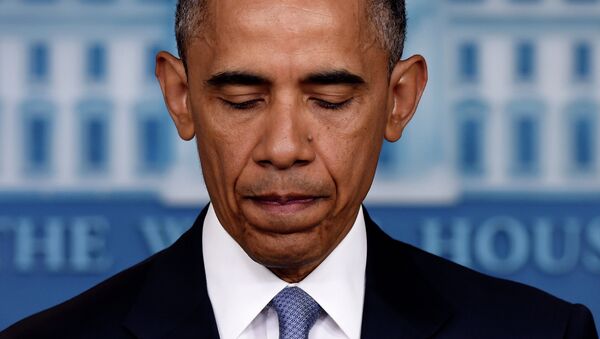 © AP Photo / Susan Walsh
Subscribe
International
India
Africa
Former Pentagon official Steven Bucci claims that the White House and US defense officials have been trying to depict the threat posed by ISIL as a problem the Iraqis must solve alone to avoid deeper military involvement.

WASHINGTON (Sputnik), Michael Hughes — The White House and US defense officials have been trying to depict the threat posed by ISIL as a problem the Iraqis must solve alone to avoid deeper military involvement, former Pentagon official Steven Bucci told Sputnik.

“If the [US President Barack] Obama administration, including General [Martin] Dempsey, can portray ISIS [ISIL] as an Iraqi problem… then it justifies the level of engagement that they are using, which I think is insufficient,” Bucci, who is currently Director of National Security Policy at the Heritage Foundation, said on Wednesday.

General Dempsey recently argued that the US campaign against the Islamic State is built on the premise that it must be won by US coalition partners and “the Iraqis themselves.”

World
US 'Winning in Iraq'? Wrong Question - General Dempsey
Dempsey’s statement, Bucci explained, is politically in line with the White House’s short-sighted marketing strategy to convince the public that the Iraqi government is ultimately responsible for defeating ISIL.

“ISIS is not just an Iraqi problem, it is not just a Syrian problem,” Bucci explained. “They are a threat to the vital national interests of the United States of America, as well as all of our allies in the region.”

The US military should have followed the model employed in Afghanistan in late 2001 and early 2002, he noted, by leveraging indigenous forces in tandem with US assets.

“Use local boots on the ground with US and specific allied special operations forces embedded with them… to go after ISIS,” Bucci said.

The Pentagon’s current strategy in Iraq is definitely “over-bureaucratized,” he added, pointing to the disproportionate amount of overhead that accompanies military trainers.

“[Out of] 450 guys we are [the United States] sending over there… only 50 of them are actually trainers and the rest are all security and logistics,” Bucci said, referring to a recent US announcement to add an additional 450 US trainers in Iraq. “I mean, that is kind of crazy.”