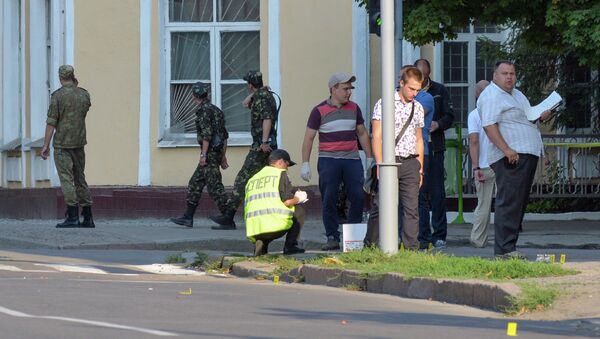 Vasyl Vovk, the head of the Ukrainian Security Service’s (SBU) main investigative department, said that a total of 54 Russian nationals have been detained and charged in Ukraine since Kiev launched military operation in Donbass.

Russia Demands Release of 2 Alleged Servicemen Captured in Eastern Ukraine
KIEV (Sputnik) – A total of 54 Russian nationals have been detained and charged in Ukraine since Kiev launched its military operation in the eastern Donbass region in April 2014, Vasyl Vovk, the head of the Ukrainian Security Service’s (SBU) main investigative department, said Wednesday.

"Fifty-four [of the detainees] are Russian nationals. They confirm this themselves. Criminal proceedings have been initiated against them," Vovk said in an interview with the Liga Novosti news agency.

"I want everyone to clearly understand what this means. This is declaring someone a suspect," Vovk emphasized, noting that the number includes persons who have been charged in absentia.

Kiev and a number of Western countries have repeatedly claimed that Moscow sent its regular troops and military equipment across the border to support local militias in Donbas. The allegations, however, have not been supported by any reliable evidence.

Two Russian Journalists Banished from Ukraine for Five Years, SBU Says
Russia has firmly denied the claims, admitting, however, that some of its citizens have traveled to Ukraine of their own accord to fight alongside militias.

The most prominent case of Russian servicemen allegedly fighting in Donbas involves two Russian citizens, captured during armed clashes last month. On May 22, a district court in Kiev ruled to keep Alexander Alexandrov and Yevgeny Yerofeyev in custody until July.

The Russian Defense Ministry has demanded their release, arguing that the two are being tortured to extract "useful confessions." The ministry said in a statement, in mid-May, that Alexandrov and Yerofeyev had received training in the Russian Armed Forces, but were not active duty servicemen at the time of their capture.