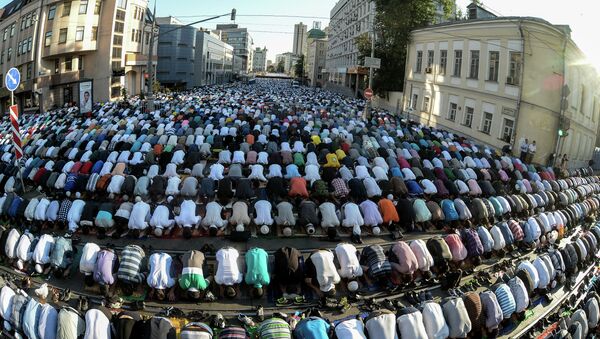 More than 300 imams from across Russia are taking part in an educational program to counter the influence of recruiters to militant Islamic organizations such as the Islamic State and al-Qaeda.

Norway Foils Islamic State Plans to Send Fighters in Guise of Refugees
Russian imams are taking courses to help them counter the influence of recruiters to radical Islam, with classes covering topics such as methods to communicate with young people, aspects of Islamic history, Islamic theology and secular subjects like politics and geography.

"In the course of the program we touch on difficult topics, which cause people to be attracted to radical movements," deputy head of the Moscow Islamic Institute, Rais Izmailov, told the Izvestiya newspaper.

"It needs to be understood that the Islamic State is not a new occurrence in the history of Islam. There were other radical movements, such as the Kharijites. They also showed extremism in their religious beliefs, and killed everybody- Muslims and non-Muslims alike," explained Izmailov.

Islamic State Captures Another Town in Libya
Izmailov noted that during the courses, the equivalent Russian abbreviation to 'ISIL,'  [The Islamic State in Iraq and the Levant] is used to refer to the 'Iblis', rather than 'Islamic' state. Iblis in Islam is one of the names for the devil.

A UN Security Council report from May made a conservatives estimate that more than 25,000 foreign fighters from more 100 countries are currently fighting for the Islamic State in Iraq and Syria, with officials stating that the true number could be more than 30,000.

"The rate of flow is higher than ever and mainly focused on movement into the Syrian Arab Republic and Iraq, with a growing problem also evident in Libya," read the report.

Earlier this month Moscow State University student Varvara Karaulova was apprehended on the Turkish border with Syria, having attempted to cross into Syria and join the Islamic State.

Karaulova, 19, was arrested by the Turkish authorities in the border town of Kilis on June 5, after her parents in Moscow raised the alarm about her disappearance. According to reports, Karaulova was traveling with a group of foreigners, including Russian nationals, apprehended as they tried to cross the border into Syria and join the Islamic State.