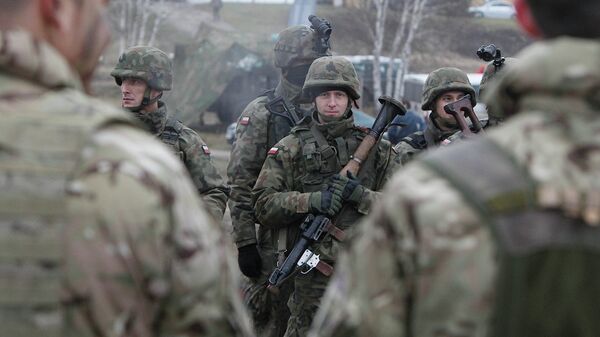 Members of Poland's influential political establishment have called for the establishment of a greater military presence at the country's border with Belarus, which already faces extensive NATO activity at its borders.

As Belarus grows increasingly concerned by NATO activity at its borders, members of Poland's political establishment increasingly call for more military bases and troops along its neighbor's border.

Speaking at an influential Polish think tank, the Euro-Atlantic Association on Monday, retired General Leon Komornicki called for Polish forces stationed near the country's border with Russia to be pulled south to plug what he sees as "a sort of hole" in the country's defense. Surrounded by NATO activity on three sides, Belarus has been increasingly concerned by the upsurge, as it further looks to China for military support, believing cooperation with Russia to be insufficient.

"Along the eastern borders of Poland from Suwalki to Przemysl [the entire length of Poland's border with Belarus], at a depth of up to 150 kilometers to Warsaw is a sort of hole," Komornicky said.

Belarus has been increasingly concerned with its security, with its president at times even lashing out at ally Russia for what it sees as inadequate support. After tests of a new multiple rocket launcher system apparently developed with China, Lukashenko commented "Our ally Russia is not so active in supporting our aspirations." Komornicki, on the other hand, based his recommendations on the belief that Russia would invade Poland through Belarus.

Wary of NATO, Belarus Begins Ukraine Border Drills
The decision, which other members of the influential think tank agreed with in Polish media, including former Defense Minister Janusz Onyszkiewicz, could create a deeper rift with Belarus, which is already weary of NATO countries' constant military exercises near its borders.

"They constantly publicly demonstrate their activity most of all at our borders. This activity can't not worry us," Belarusian President Alexander Lukashenko said on Tuesday.

Belarus has also responded to the upsurge in NATO activities near its borders by staging exercises with China and stepping up military cooperation with the country via agreements signed in May.