Economic Crisis in the Euro: When Reality Becomes a Greek Tragedy 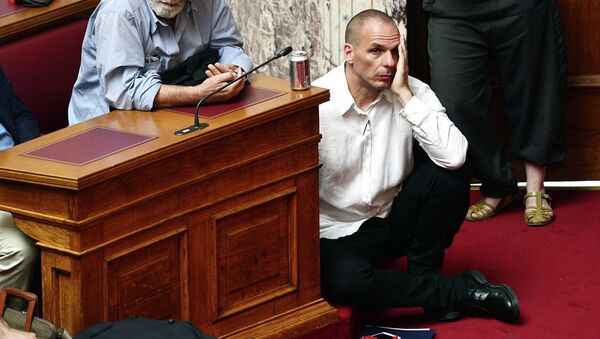 "Failure to reach an agreement would lead initially to a Greek default and ultimately, to the country's exit from the euro area and - most likely - from the European Union," says the Bank of Greece.

As the deadline looms for Greece to pay back its loan to the International Monetary Fund (IMF), Greek Prime Minister Alexis Tsipras talks of humiliation — his rhetoric on the Troika becoming more tragic. Tsipras has told his Syriza party that the proposed austerity measures from the EU and the IMF "humiliate not only the Greek government… but an entire people."

"The debate in Greece and outside Greece would be easier if the Greek government would tell exactly what the Commission… are really proposing."

Elias Papaioannou, Associate Professor of Economics at the London Business School told Sputnik: "The Greek government is playing a game with its European Union partners. They want to have a deal with the IMF, however instead of communicating that to the Greek people, they've entered a game with the IMF and other partners using a very polemic rhetoric.

"This has to stop; it's added a lot of confusion for the Greek people."

Speaking from Athens, Professor Papaioannou said: "Today there will be a demonstration outside parliament in Syntagma Square by people who are supporting the hardline stance against the IMF. And tomorrow — again in Syntagma Square — pro-European supporters who want Greece to stay in the EU will gather outside government buildings.

"This indicates that the Greek people are not unified. The situation in Athens is depressing. The economy has been in asphyxia for the past six months."

"It's a viscous circle of uncertainty, depressions and recessions with a lot of rhetoric about a Grexit. It's tragic; as time goes by I become more afraid of a Graccident rather than a Grexit."

Information released in the Greek press about debt restructuring and extensions of the maturity of current loans is something in principle that the IMF is willing to discuss. The IMF are pushing towards this approach — but it entails an agreement based on trust — which has been evaporated.

Meanwhile, Austria Chancellor Werner Faymann is siding with the Greek Prime Minister, citing some of the proposals from the EU and the IMF he thinks are unreasonable.

"High unemployment, 30 to 40 percent, [with] no health insurance, and then raising VAT on medicines. People in this difficult situation cannot understand that."

The Austrian chancellor also responded to comments made by EC president Jean-Claude Juncker, who accused Tsipras of not being straight with his people about the creditors' proposed reforms.

Faymann said: "I stand on the side of the Greek people who in this difficult position are being proposed more things [that are] detrimental to society."

Meanwhile, according to Profossor Papaioannou, the key issues on pensions and social security that the IMF is pushing for are right.

"In 2015, for people to retire at 47 or 48 is totally outrageous and the IMF should move ahead aggressively to change this."

The proposals by Brussels, if accepted by Tspiras on behalf of the Greek people, would unlock an $8.1 billion installment recovery package. The reality of the situation in Greece is looming, with the deadline is on the horizon. Greece has until the end of June to reach a deal and pay the IMF $1.8 billion (€1.6 bn). Which, if it doesn't, could result in a Grexit — by Graccident or not.