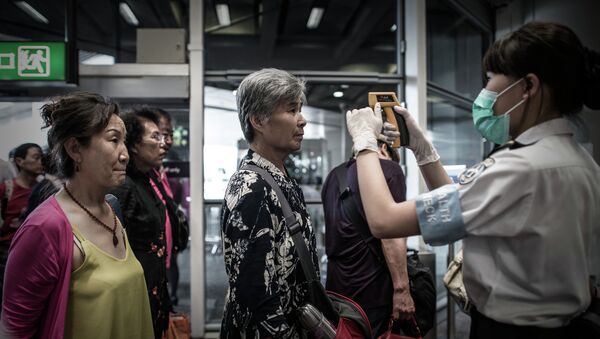 According to World Health Organization, call for a worldwide health emergency is unnecessary over the Middle East Respiratory Syndrome.

MERS Virus Death Toll in South Korea Reaches 20
MOSCOW (Sputnik) – The call for a worldwide health emergency is unnecessary over the Middle East Respiratory Syndrome, the World Health Organization said in a statement on Wednesday.

“The Committee concluded that the conditions for a Public Health Emergency of International Concern have not been met,” the statement reads.

WHO said that travel restrictions because of the virus are also unnecessary but said the public should remain attentive so as not to contract it.

“WHO does not recommend the application of any travel or trade restrictions and considers screening at points of entry to be unnecessary at this time. Raising awareness about MERS and its symptoms among those travelling to and from affected areas is good public health practice,” according to WHO.

“The Committee noted that available evidence on genetic sequencing did not identify any significant changes in the viruses obtained from cases in the Republic of Korea compared to viruses from the Middle East,” the WHO statement reads.

The significant outbreak of the Middle East Respiratory Syndrome in South Korea is mainly due to overcrowded emergency rooms and hospitalized patient visits, the World Health Organization said in a statement.

WHO defined five reasons the spread of MERS has been noted in South Korea, including “close and prolonged contact of infected MERS patients in crowded emergency rooms and multibed rooms in hospitals and the custom of many visitors or family members staying with infected patients in the hospital rooms facilitating secondary spread of infections among contacts.”

WHO also blamed South Korean health care workers for their lack of awareness of the disease, as well as the general public’s lack of understanding.

The health organization also said that sick individuals also helped spread the virus by looking for treatment at numerous hospitals, or what WHO refers to as “doctor shopping.”