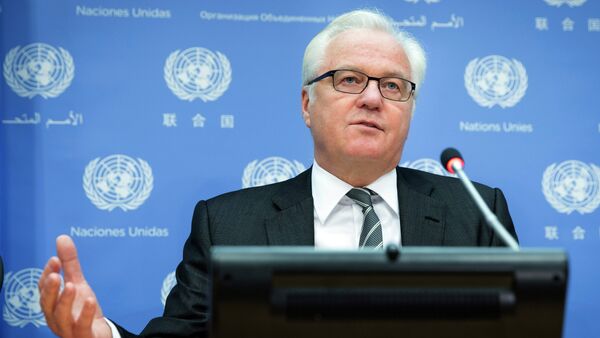 It is unlikely that the United Nations will open a peace support office in Ukraine, Russia’s Permanent Representative to the UN Vitaly Churkin said.

UN Concerned Over Blocked Humanitarian Access to Eastern Ukraine
UNITED NATIONS (Sputnik) – In early May, UN Secretary-General Ban Ki-moon told Ukrainian President Petro Poroshenko he would continue discussing the opening of the office in Ukraine’s capital with the UN Security Council. Last week, US Ambassador to United Nations Samantha Powers visited Kiev with a declared goal to promote the implementation of the Minsk accords.

“The implementation of the Minsk agreements was hardly mentioned. But the opening of the UN office in Ukraine came to the fore, which, by the way, is not foreseen,” Churkin said in an interview with RIA Novosti.

The envoy added that Russia is confident that Ban did not authorize Powers to represent the United Nations on the issue of the office. Therefore, it is not clear why she would make such a confusing and inappropriate comment to Ukrainian authorities.

The opening of a UN office in Kiev was requested by the Ukrainian government in March, despite the Organization for Security and Co-operation in Europe's (OSCE) responsibility for monitoring the situation in the country, stipulated by the Minsk agreements.

The Minsk agreements were worked out by Russia, Ukraine, Germany and France in February and later signed by Kiev and pro-independence fighters of Ukraine's eastern Donbas. The documents contain a set of measures that all parties agree will stop the ongoing violent military confrontation in Ukraine's southeast.