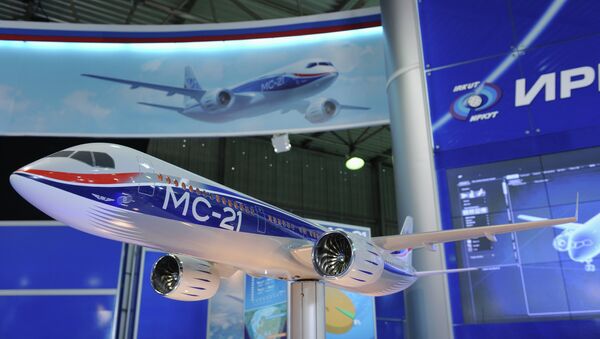 According to head of sales for the plane’s producer, negotiations with the Russian Defense Ministry on the purchase of MC-21 passenger jets will start soon.

The Russian Defense Ministry plans to purchase several dozen MC-21 passenger jets to replace its aging fleet of Tu-134s and Tu-154s, the head of sales for the plane's producer, Irkut, told RIA Novosti.

Russian Military Testing Takhion Reconnaissance Drones in Kuril Islands
"We work with both state-owned firms and the Defense Ministry. According to my information, the Defense Ministry can purchase several dozens of MC-21 aircraft", Valery Lunkov said at the Le Bourget Air Show outside Paris.

"We haven't yet begun talks with the [Russian] Defense Ministry on the precise base configurations, but it's assumed this process will begin soon," he added.

Irkut MC-21 is a new narrow-body design mid-range passenger jet, the production of which will be mostly localized in Russia.

In November 2014, Russian Minister of Industry and Trade Denis Manturov said that the first MC-21 aircraft would be constructed by the end of 2015.

According to Russian Deputy Prime Minister Dmitry Rogozin, Russia plans to sell up to 1,000 MC-21 jets within the next 20 years and has so far garnered 175 orders.

CORRECTION: The original version of this article stated that Irkut planned to create a reconnaissance aircraft similar to the US AWACS, but the corporation later withdrew this statement as inaccurate.