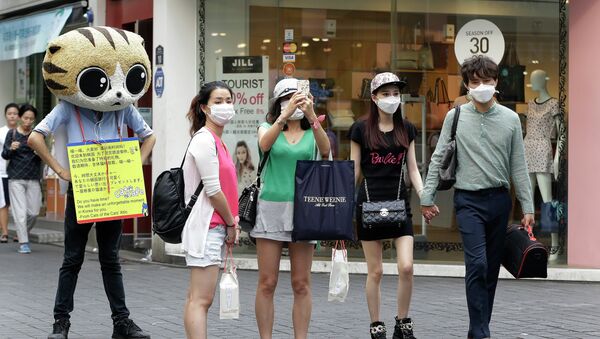 © AP Photo / Ahn Young-joon
Subscribe
With 16 people dead and thousands under quarantine after an outbreak of the Middle East respiratory syndrome (MERS), Seoul is struggling to manage the countrywide health-panic as well as its impact on the tourism industry.

S Korea Approves $45 mln Spending Plan to Combat Deadly Respiratory Disease
As of Tuesday, there have been 162 confirmed cases of MERS in South Korea.  With the panic spreading across the country, many have resorted to staying indoors and away from public spaces, which has led to significant losses in the country’s tourism industry.

According to the Strait Times, tourist arrival in South Korea has dropped by 24.6% in just the first 11 days of June, and the country may eventually lose $900 million in tourism revenue if things don’t improve.

As of June 14, 101,100 foreigners have cancelled their flights to South Korea, according to the Korea Tourism Organization. The government has already announced plans to offer $64 million in loans to a number of troubled tourism sectors.

Seoul is also taking alternative measures to respond to the tourism crisis. Namely, the country’s Ministry of Culture, Sport and Tourism has announced that it will offer any tourist free "MERS insurance" that will cover all their medical, and even travel expenses should they catch the virus. The insurance will be available to tourists as soon as they enter the country.

As a preventative measure, hand sanitizers will also be provided at all tourist attractions as well as a 24-hour toll-free number tourists can call if they develop any symptoms. The government has even launched an online campaign as part of its official "Visit Korea" site that includes a pop-up reassuring concerned tourists that they don’t need to worry about the virus.

"I am sorry for all the inconvenience cause due to the outbreak, but there is no need to be afraid of travelling to South Korea," Kim Chong said. "The government has implemented various safety measures for tourists and we hope that MERS will be stamped out quite soon."

According to the World Health Organization, MERS is a viral respiratory disease transmitted from camels to people. It was first reported in Saudi Arabia in 2012 before it spread to other countries, and there is still no vaccine for the disease. Symptoms of the virus include fever, cough, and shortness of breath.

The first confirmed case of MERS in South Korea was reported on May 20, and the country is now experiencing the largest known outbreak of the virus outside the Arabian Peninsula.