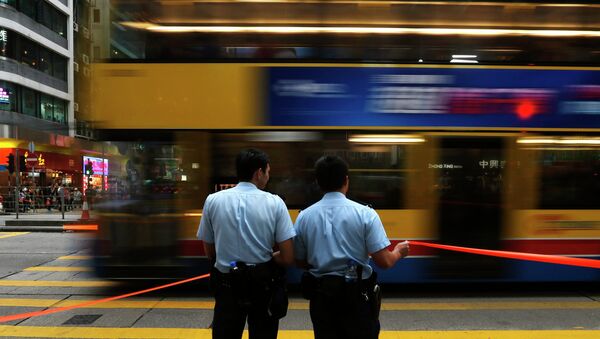 Hong Kong police charged six detainees with conspiracy to cause an explosion ahead of the upcoming vote on political reform.

MOSCOW (Sputnik) – Hong Kong police charged six detainees with conspiracy to cause an explosion ahead of the upcoming vote on political reform in Hong Kong's legislature, the city's government said in a statement Tuesday.

A total of ten people were arrested by police on Sunday and Monday on suspicion of conspiracy to cause an explosion and having ties with radical groups. Police also seized suspected explosives and weapons.

Boar in a China Shop: Wild Animal Goes Through Roof in Hong Kong Mall
According to the statement posted on the Hong Kong government website, five men and a woman will appear before the courts on Wednesday, while the other detainees were released on bail.

On Wednesday, Hong Kong's Legislative Council will commence a debate on a China-backed electoral reform proposal with a vote on the bill expected later in the week.

According to the reform project, hopefuls for the position of city chief executive will be first screened by a special nominating committee, which will shortlist candidates ahead of the vote.

Opponents of the proposed reforms argue that what is being suggested does not amount to universal suffrage and accuse Beijing of attempting to remove unwanted candidates from the ballot list.