EU Trade Committee to Decide on TTIP Amendments on June 29 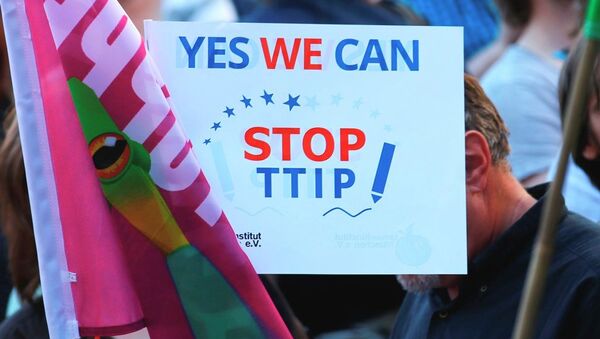 The International Trade Committee of the European Parliament will decide whether proposed amendments to the controversial EU-US free trade deal should be voted on by lawmakers on June 29.

TTIP - Part of Grand US Plan to Isolate Russia From Europe
MOSCOW (Sputnik) – The 116 amendments to EU-US trade deal need to receive at least five votes from members of the International Trade Committee of the European Parliament to be put to a plenary vote during the July or September sessions of Parliament, the EU body said in a press release on Tuesday.

The Transatlantic Trade and Investment Partnership (TTIP) deal, devised to enable the free flow of goods across the Atlantic, has sparked controversy among the European public over fears of its potential adverse effects.

Opponents of TTIP claim that the agreement limits the rights of individuals and sovereign countries in favor of multinational corporations and financial industry profits.

To date, over 2.1 million Europeans have signed an online petition against the deal.

In April, tens of thousands of people across Europe took to the streets to demonstrate against the swift and secret negotiations being carried out on the treaty as well as against its potential consequences.