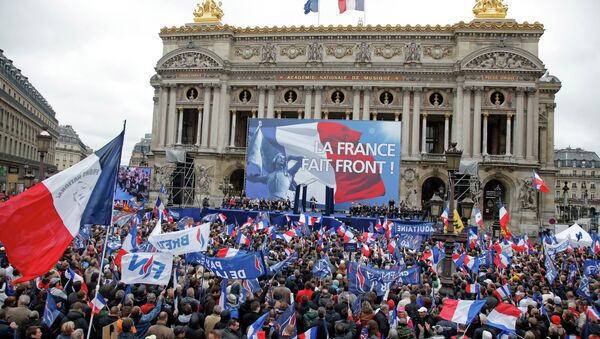 Earlier on Tuesday, a survey conducted by ICM Research exclusively for Sputnik revealed that almost half of British, French and Spanish nationals participating in a poll say that the rising inflow of refugees to the European Union is the primary reason right-wing parties have gained popularity in Europe.

"People vote for right [-wing] parties because they don’t want the additional immigration, they see the lasting economic crisis, the crisis of euro, the crisis of debts, the social crisis, the deindustrialization of Europe, the problems of eurozone, and they [European leaders] are powerless and incompetent," Monot said.

"The world crisis in the economic and social sphere is developing quickly and people cannot support the deceit and the incompetence of actual European leaders, there is a separation between elite and common people," the member of the European Parliament added.

The National Front won a third of French votes in the 2014 European parliament election amid other eurosceptic and far-right populist parties that performed strongly but lacked the backing to secure a majority.

Main Reasons for the Growing Poularity of Opposition Parties
© Sputnik
000000
Popular comments
Of course it's immigration but that's a symptom of a lack of democracy in Europe and the EU. It's not a mass outbreak of racism- it's a mass outbreak of democracy. More than anything, it's a revolt against the EU's Trotskyite internationalism which despises not just the nation state, but national identity.