A War of Words: How Ukraine Struggles to Shake Off Its Creditors 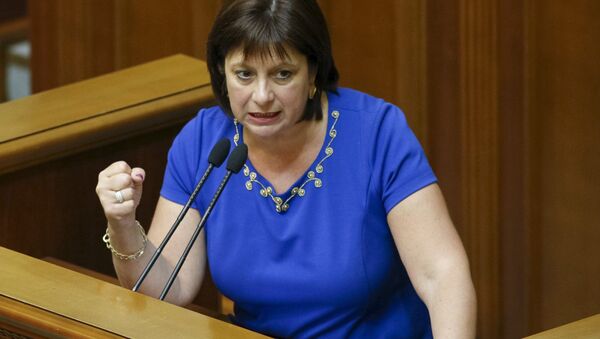 Kiev acknowledges its $3-billion loan from Russia, which President Poroshenko has called "a bribe" to his ousted predecessor Viktor Yanukovych, which he "took in exchange for his refusal to sign the EU Association Agreement"; however, Ukraine's government is still struggling to restructure it.

'West' is Not the Charity Business: There'll Be Hell to Pay for Ukraine
The comments follow Monday’s announcement of President Poroshenko that the 2013 loan from Russia is “a bribe” to his ousted predecessor Viktor Yanukovych.

In an interview with Bloomberg Television from his office in Kiev, he alleged that the loan was issued in exchange for the president's refusal to sign the Association Agreement with the European Union.

"That was a bribe," Poroshenko said. "[Even so], Ukraine will demonstrate responsible behavior. This is the responsibility of the Finance Ministry and the government."

“In the first place, we are expecting some kind of explanation on whether the current Ukrainian authorities are planning to reject their status as a successor state in terms of the country's commitments, including international, and, primarily for us, financial and other obligations to Russia," Kremlin spokesman Dmitry Peskov told reporters in Moscow.

“If we are talking about the legitimacy of power in Ukraine, the question is whether it is challenging the principle of succession of Ukraine as a state: does Ukraine [honor] its international obligations or does it refuse them?” he added.

"We still don't have an answer to this question, and, frankly, I don't know whether President Poroshenko's statement could be considered the answer," Peskov said.

Prime Minister Medvedev also commented on the issue, wondering what the billions negotiated by Ukrainian leaders with the IMF could be called then.

“If the $3 bln Russian loan to Ukraine was a bribe, as Mr. Poroshenko has called it, then the billions negotiated by Ukrainian leaders with the IMF is grand larceny,” the prime minister remarked via Facebook and Twitter.

If the $3 bln loan was a bribe, as Mr Poroshenko says, then the billions from the IMF is grand larceny https://t.co/nEVX5rmjjo

Following the Maidan protests that toppled Yanukovych in February 2014, the new Ukrainian authorities have been struggling with the shrinking economy by taking international loans.

The total debt of Ukraine, according to the country’s Prime Minister Arseny Yatsenyuk, is estimated to be around $50 billion, of which $30 billion is external debt and $17 billion is internal debt.

Ukraine’s Debt Reaches 100 Percent of GDP - Opposition Lawmaker
In December 2013, Russia made a $15-billion loan to Ukraine and bought $3 billion of Ukraine's first Eurobonds. The remainder of the loan was canceled following the February 2014 regime change in Ukraine.

In late May, Russian Prime Minister Dmitry Medvedev said Moscow was not going to restructure the loans issued to Ukraine.