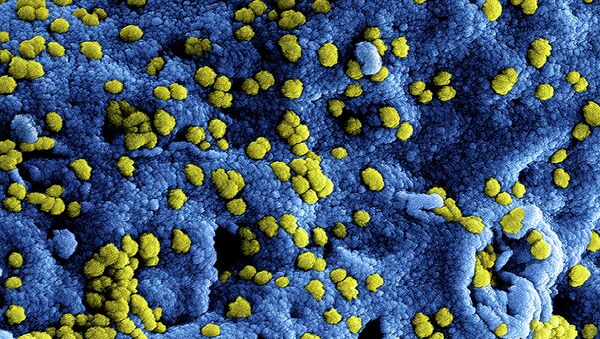 © Flickr / NIAID
Subscribe
The South Korea cabinet authorized on Tuesday a spending plan to combat an outbreak of Middle East Respiratory Syndrome, the largest outside the Arabian Peninsula.

South Korea Must Restrict Travel Amid MERS Virus Outbreak - WHO
The government of South Korea approved a spending plan of 50.5 billion won (45.2 million USD) on Tuesday to cope with the increasing health and economic costs of the country's MERS outbreak.

“The money will be allocated in a timely manner to support the government's all-out effort to contain MERS,” announced the Health Ministry.

Patients diagnosed with the disease, and those being quarantined, are to be directly supported with 17.4 billion won of the total, stated the Ministry. The rest is to be spent on purchasing medical supplies and equipment to cope with the outbreak, and on support for medical personnel and other emergency service workers.

On Tuesday South Korea reported the death toll from MERS had risen to 19, after three more people died of the disease. According to the South Korean authorities, the fatality rate from the illness in the country is currently around 12 percent.

First Case of MERS Transmission Outside Hospital Walls Recorded in S Korea
As of Tuesday, 154 people in South Korea had been diagnosed with the disease, and some 5,580 others were in isolation after coming into possible contact with people infected with MERS.

The first known cases of MERS, a viral respiratory illness, have been traced back to Jordan in 2012; health officials first reported the disease in Saudi Arabia in September 2012. The elderly and those with weakened immune systems are especially susceptible to the illness.

South Korea is experiencing the largest known outbreak of the disease outside the Arabian Peninsula. Since September 2012, at least 1,289 laboratory confirmed cases of the infection have been confirmed by the World Health Organization, and at least 455 people have died from the disease.