About 780 Hospitalized in Wake of Japanese Heat Wave 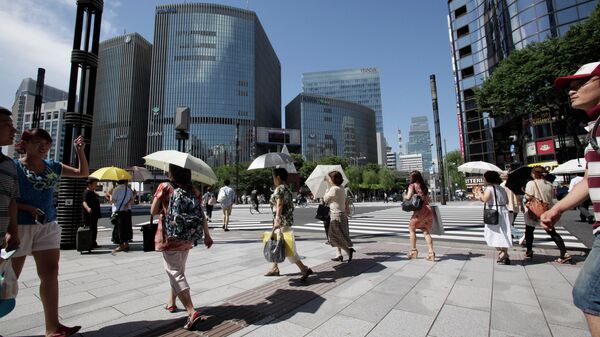 © AP Photo / Shizuo Kambayashi / File
Subscribe
International
India
Africa
Japan's Fire and Disaster Management Agency announced that approximately 780 people have been admitted to hospitals in Japan due to sultry weather in several regions of the country.

TOKYO (Sputnik) — Approximately 780 people have been admitted to hospitals in Japan due to sultry weather in several regions of the country, Japan's Fire and Disaster Management Agency (FDMA) said Tuesday.

The agency released data collected on the week of June 8 – 14. According to FDMA, in charge of ambulance services, cases of hospitalization over the heat wave were reported in the cities of Tokyo and Osaka, as well as the Saitama, Hyogo and Aichi prefectures, among others.

Asia
Indian Heat Wave Death Toll Hits 2,000
During May 11-17 period, two people died and 480 were hospitalized in Japan for heat exhaustion, according to FDMA.

Japan has a long history of struggling with heat waves. In 2011, 26 Japanese nationals died of heatstroke in the first decade of June while nearly 13,000 were admitted to hospitals.

At present, heavy rains hit most of Japan’s regions, according to local meteorological services. Several prefectures issued a warning due to possible landslides and flooding.