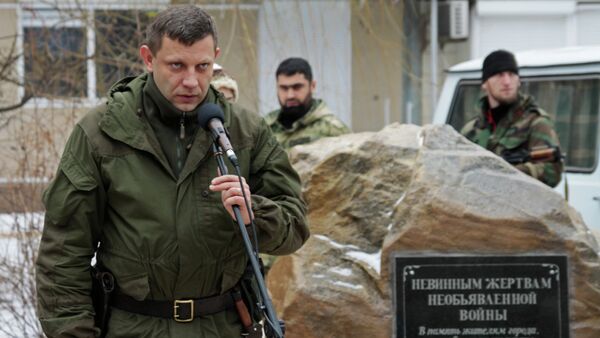 Donetsk People’s Republic (DPR) head Alexander Zakharchenko said that DPR is an independent state and will never be a part of Ukraine.

“Whatever happens in Minsk, DPR is an independent state and will never be a part of Ukraine,” Zakharchenko said during a meeting with residents of the town of Oktyabrsky, which repeatedly has been subject to shelling by Kiev-led forces.

The region proclaimed independence from Ukraine in April 2014 amid a standoff with authorities in Kiev. Following the start of the military operation against southeast’s militias the same month, the Donetsk region held a referendum in May and finalized its secession, creating a people’s republic with its own government in Donetsk. The vote has not been internationally acknowledged.

Donbass on Brink of Major War, Conflict May Escalate Any Time - DPR
A series of negotiations, brokered by Russia, Germany, France and the Organization for Security and Co-operation, has led to an agreement in early 2015 that conditioned the republic’s reintegration into Ukraine on Kiev overhauling the country’s constitution to grant it a special status within the nation’s borders.

The recent escalation of tensions in the region has so far hindered the progress in talks between the warring parties.