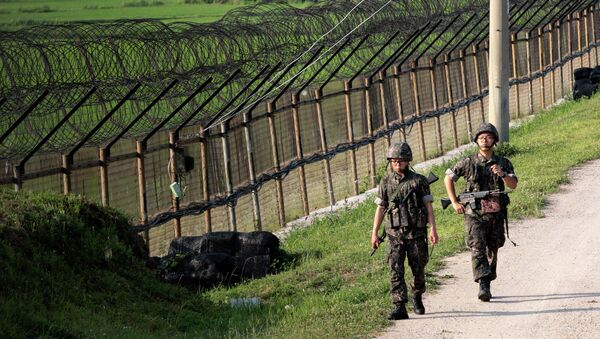 A North Korean soldier managed to cross his country's land border with South Korea on Monday; this rare act of defection saw him walking across what is believed to be one of the world's most heavily fortified frontiers.

North Korea Claims it Needs Nukes to Contain US Nuclear Threat
Seoul has reported a rare act of defection by a North Korean soldier, who managed to enter South Korea on Monday by walking across the heavily fortified Demilitarized Zone (DMZ), sources said.

"A North Korean man presumed to be a serviceperson defected to our side earlier this morning," an official from South Korea’s Ministry of National Defense said.

He added that the soldier, reportedly in his late teens, approached a remote South Korean guard post in Gangwon province's Hwacheon County, and "expressed his desire to defect."

He also said that there was no exchange of fire or warning shots during the incident, and that the soldier is currently under investigation by South Korean officials. His identity and motive have yet to be revealed.

Crossing the tensely-guarded land border between the two Koreas is a tricky task, which is why most North Korean defectors prefer to enter the South via the country's porous border with China.

South Korea Successfully Tests Missile Capable of Reaching North Korea
Despite more than a thousand defections from North Korea to South Korea reportedly taking place every year, the last crossing via the DMZ occurred in 2012.

The 4-kilometer (2.5 mile) wide DMZ between the North and the South stretches along the length of the 250-kilometer (155 mile) land border; the DMZ is fortified with landmines and barbed wire, and there are telephones on the South Korean side for defectors from the North to call from when they seek help.

Last year, a total of 1,396 North Koreans defected to South Korea, according to officials in Seoul.