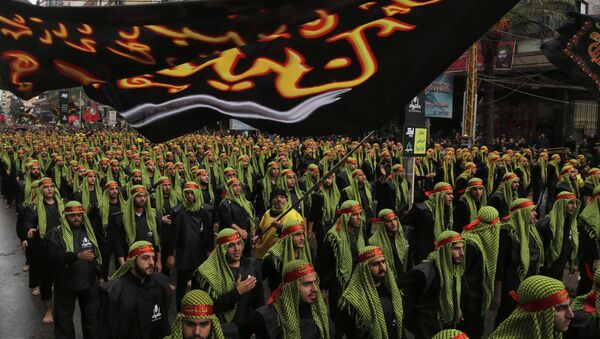 © REUTERS / Aziz Taher
Subscribe
As US experts released an article saying that Tel Aviv is planning to go to war with Hezbollah in Lebanon, Israeli newspaper bashes the claims saying that such claims are one of the reasons that rush governments into war with countries like Iraq, Lebanon and Palestine.

According to President of National Iranian American Council Trita Parsi and expert on Middle East Paul Pillar, Israel is planning to go to war with Hezbollah in Lebanon this summer.

The experts behind such claims suggest that Israel might do that to disrupt the signing of the deal on Iran's nuclear program.

Upon hearing such claims the Israeli newspaper ‘Maarvi’ stressed that the academic’s predictions are "even more stupid than the assumption that John Kerry broke his leg on purpose to delay the talks."

The newspaper elaborates that behind such notions stand the same intellectual circles, which rushed the United States into war with Iraq and Israel to fight with Lebanon and Palestine.

The authors of the article, which suggests that Israel will wage war against Hezbollah, suggest that the deciding factor may be an Israeli calculation that war will shift momentum in the US Congress decisively against the pending nuclear deal with Iran, a deal that critics say will increase Iran's maneuverability in the region, including its support for Hezbollah.

Fanning the Flames: West Stirs Regional Crisis to Increase Israel’s Safety?
In support of their claims the authors cite the example of the war in Lebanon in 2006 as a similar scenario which will allow supporters of Israeli Prime Minister Benjamin Netanyahu in US Congress to oppose Obama.

The Israeli newspaper blasts such notions by reminding the authors that the second Lebanon War began with threats and attacks by Hezbollah, by kidnapping of the bodies of soldiers and so on.

Maarvi further says that scenario now is totally different and the US authors are making claims on the basis of unfounded speculation.

The newspaper mentions that, fortunately, in Israel there is a serious constraint which can curb their leaders such as Netanyahu.

Israeli military intelligence reports regularly about the strength of Hezbollah. Recently, the country's intelligence claimed that the group is capable of launching over 1,200 missiles per day.

According to the Israeli newspaper, this knowledge of Hezbollah’s capacity must be known to the population and force politicians to think twice before each step.

Maarvi bashes the US analysts' article by further saying that such an opinion on the possibility of war has been around since 2000 and has not changed much.

“Such decisions are made by the right-wing radicals, for them the war is under no pretext or the result of some provocation, it is almost a ‘Pavlovian’ reflex,” Maarvi wrote.

“Everyone who does not want a repetition of a senseless war, must again and again sound the alarm so that we are not taken by surprise and do not fall under hail of missiles,” the Israeli newspaper concluded.

000000
Popular comments
They are not who they say they are; If the question of what exactly is the mark of the beast, spoken of in the scriptures, has ever entered your mind then you need to watch this video? If you understand this; blogs.timesofisrael.com/leaked-report-israel-acknowledges-jews-in-fact-khazars-secret-plan-for-rever www.yahuahreigns.com/saturn%20and%20the%20occult.html Then your ready for this information; youtu.be/4HW0ioKwZlE
wcltrust
17 June 2015, 17:06 GMT
000000
Newsfeed
0
New firstOld first
loader
LIVE
Заголовок открываемого материала
Access to the chat has been blocked for violating the rules . You will be able to participate again through:∞. If you do not agree with the blocking, please use the feedback form
The discussion is closed. You can participate in the discussion within 24 hours after the publication of the article.
To participate in the discussion
log in or register
loader
Chats
Заголовок открываемого материала
Worldwide
InternationalEnglishEnglishMundoEspañolSpanish
Europe
DeutschlandDeutschGermanFranceFrançaisFrenchΕλλάδαΕλληνικάGreekItaliaItalianoItalianČeská republikaČeštinaCzechPolskaPolskiPolishСрбиjаСрпскиSerbianLatvijaLatviešuLatvianLietuvaLietuviųLithuanianMoldovaMoldoveneascăMoldavianБеларусьБеларускiBelarusian
Transcaucasia
ԱրմենիաՀայերենArmenianАҧсныАҧсышәалаAbkhazХуссар ИрыстонИронауОssetianსაქართველოქართულიGeorgianAzərbaycanАzərbaycancaAzerbaijani
Middle East
Sputnik عربيArabicArabicTürkiyeTürkçeTurkishSputnik ایرانPersianPersianSputnik افغانستانDariDari
Central Asia
ҚазақстанҚазақ тіліKazakhКыргызстанКыргызчаKyrgyzOʻzbekistonЎзбекчаUzbekТоҷикистонТоҷикӣTajik
East & Southeast Asia
Việt NamTiếng ViệtVietnamese日本日本語Japanese俄罗斯卫星通讯社中文（简体）Chinese (simplified)俄罗斯卫星通讯社中文（繁体）Chinese (traditional)
South America
BrasilPortuguêsPortuguese
NewsfeedBreaking
17:18 GMT'I Feel Humiliated': Captain Amarinder Singh Resigns as Chief of India's Punjab State
16:38 GMTWhy Did the US Ditch Its European Allies in Favour of UK and Australia to Wrangle With China?
16:29 GMTUS Pledges to Boost 'Removal Flights' to Transport Haitian Migrants Stuck Under Texas Bridge
16:12 GMT'Justice for J6': Protesters Rally in Washington, DC to Support Charged Capitol Riot Demonstrators
15:39 GMTSeveral Reportedly Injured as Car Rams Into Cafe Terrace in Fontainebleau, France
15:27 GMTMalaysia Claims New AUKUS Alliance May Spark Nuclear Arms Race in Indo-Pacific
15:08 GMTParis Being Rocked by Protests Against COVID-19 Passes for 10th Weekend in Row
14:31 GMTNotre-Dame Restorers Finish Fortification Works to Start Restoration Phase
14:19 GMTWhen Trump Asked Obama About His 'Biggest Mistake', POTUS 44 'Couldn't Think of Anything': Book
14:05 GMTFrance 'Raises Game' on Migrant Interceptions After UK Threatens to Scrap Funding to Paris
14:00 GMTFour British Ex-PMs Snub Johnson's Chequers Centenary Banquet
13:58 GMTAir Defence Strengthened in Northern Ukraine as Part of Exercises With NATO, Air Command Says
13:54 GMTSenior Dies From Self-Inflicted Wounds at Medics' Protest in Warsaw
13:53 GMTGuinean Military Says Ousted President Conde to Remain in Country
13:30 GMTElon Musk Says Future SpaceX Ships Will Have Food Warmers After Inspiration4 Mentions Cold Pizza
13:22 GMTEx-Sec of State Pompeo, NSA O'Brien Knew Nothing About Gen. Milley's Secret Talks With China: Report
13:13 GMTParisians Protest Against COVID-19 Health Pass, Mandatory Vaccinations
13:03 GMTLive Updates: Trump Supporters Gather for 'Justice for J6' Rally Near US Capitol
13:03 GMTK-Pop Sensation BTS Turns Celebrity Diplomats, Will Represent South Korea at the UN General Assembly
12:59 GMTPolice Scrap Request for 100 Armed National Guardsmen to Tackle Pro-Capitol Riot Rally