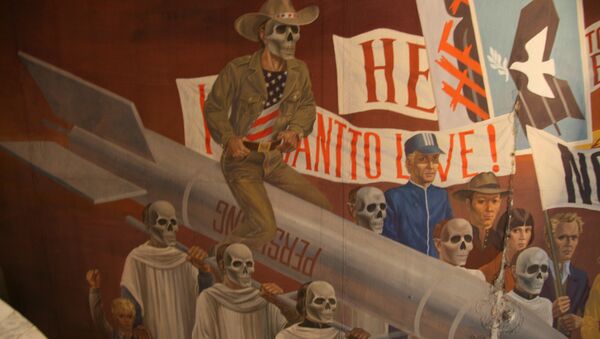 © Flickr / kvitlauk
Subscribe
The US foreign policy drags the country into a vicious cycle of interventionism, Ron Paul underscored, referring to the recent Pew Research poll that indicated that more than 50 percent of Americans would not oppose going to war with Russia.

Americans Sign Petition to Preemptively Nuke Russia
According to the latest poll conducted by the Pew Research Center, a US independent fact tank, many NATO countries are reluctant to defend their allies against Russia with the exception of the United States and Canada: over 50 percent of Americans and Canadians would not oppose going to war with Russia.

This trend is really worrisome, according to Dr. Ron Paul, a former Republican congressman and two-time US presidential candidate, and Daniel McAdams, Executive Director of the Ron Paul Institute for Peace and Prosperity.

Americans' readiness to get involved in a direct military confrontation with Russia could be regarded as a relic of the Cold War, suggested the experts, warning that the US foreign policy course may drag the country into a vicious cycle of interventionism that in its turn would further undermine America's economy and the well-being of its citizens.

"It really does not solve the problem of what the countries are to do with NATO. I am afraid NATO is going to be with us for a long time. I see it as only a tool for our propaganda," Dr. Paul noted.

Attitudes are changing gradually, and a lot more Americans do not believe the government either, despite all the propaganda from Washington, Ron Paul stated, adding that the Internet is helping people to question more what the US government is doing.

Most Residents of NATO Countries Don't Support Collective Defense Principle
It is remarkable though that lots of NATO-member countries expressed their unwillingness to unleash a war against Russia. Particularly, the population that is the least enthusiastic to go to war with Russia is that of Germany. While Angela Merkel is regarded by many as a lap dog of Washington, the German people are not with her, Mr. McAdams stressed.

While the West is threatening itself with Russia's phantom menace, there is another figure that shows how "militant" the Russians really are, the experts noted.

"We [the United States] are spending [on defense] more than twice as much as the next four countries put together. And Russia is the fourth. There is a country called Saudi Arabia that spends [on defense] more money than Russia," Dr. Paul stressed.

Some people are nearly hysterical about the need to go war, Ron Paul underscored referring to the fake petition to Obama to launch a preemptive nuclear strike against Russia, initiated by Mark Dice, a best-selling author of "Inside the Illuminati."

Ron Paul emphasized that it's the Institute's job to try to inform people about what is really going on, preventing them from blindly following the US' neocon propaganda.

000000
Popular comments
The US Press is always trying to scam the People. Americans I know want no war with Russia OR China, and want the US OUT of Ukraine!
augur90057
15 June 2015, 00:36 GMT
000000
Newsfeed
0
New firstOld first
loader
LIVE
Заголовок открываемого материала
Access to the chat has been blocked for violating the rules . You will be able to participate again through:∞. If you do not agree with the blocking, please use the feedback form
The discussion is closed. You can participate in the discussion within 24 hours after the publication of the article.
To participate in the discussion
log in or register
loader
Chats
Заголовок открываемого материала
Worldwide
InternationalEnglishEnglishMundoEspañolSpanish
Europe
DeutschlandDeutschGermanFranceFrançaisFrenchΕλλάδαΕλληνικάGreekItaliaItalianoItalianČeská republikaČeštinaCzechPolskaPolskiPolishСрбиjаСрпскиSerbianLatvijaLatviešuLatvianLietuvaLietuviųLithuanianMoldovaMoldoveneascăMoldavianБеларусьБеларускiBelarusian
Transcaucasia
ԱրմենիաՀայերենArmenianАҧсныАҧсышәалаAbkhazХуссар ИрыстонИронауОssetianსაქართველოქართულიGeorgianAzərbaycanАzərbaycancaAzerbaijani
Middle East
Sputnik عربيArabicArabicTürkiyeTürkçeTurkishSputnik ایرانPersianPersianSputnik افغانستانDariDari
Central Asia
ҚазақстанҚазақ тіліKazakhКыргызстанКыргызчаKyrgyzOʻzbekistonЎзбекчаUzbekТоҷикистонТоҷикӣTajik
East & Southeast Asia
Việt NamTiếng ViệtVietnamese日本日本語Japanese俄罗斯卫星通讯社中文（简体）Chinese (simplified)俄罗斯卫星通讯社中文（繁体）Chinese (traditional)
South America
BrasilPortuguêsPortuguese
NewsfeedBreaking
06:13 GMTGerman Chancellor Candidates in Focus as Tough Coalition Talks Loom
05:53 GMTBrexit to Blame: Germany's Olaf Scholz Says 'End to Freedom of Movement' Fueled UK Petrol Crisis
05:37 GMTUK Motorist Runs Over Knife-Wielding Man Amid Alleged Petrol Dispute - Video
05:23 GMTPatriarchy Strikes Back? Iceland's Historic Female-Majority Parliament Up in Smoke After Recount
04:43 GMTUS Marine Colonel Put in Brig For ‘Asking for Accountability’ Over US Departure From Afghanistan
04:03 GMTWitness Who Claims She Saw Prince Andrew Dancing With Giuffre at Club to Testify in Court - Report
03:24 GMTBennett Claims He Said 'No Three Times’ to President Biden During Their August Meeting
03:16 GMTRepublicans Slam DHS Chief Mayorkas for Allowing Thousands of Haitians Into US
01:37 GMTUS ‘Humiliated Like Never Before’, Trump Says, After DHS Allowed Thousands of Migrants to Pour in
01:31 GMTLockheed Martin to Build US Army’s Next Generation Tactical Vehicle Based System
01:10 GMTBorder Patrol Agents Disgruntled Over Biden's Attempts to Throw Them 'Under the Bus' - Report
00:53 GMTBeard-Check: Afghan Barbers Banned From Shaving, Trimming Beards - Reports
00:27 GMTR. Kelly Found Guilty: Will Artist Be Removed From Music Services?
00:03 GMTIs Sir Alex Ferguson Right, That Ronaldo, and not Messi, Could Score a Hat-trick for Anyone?
00:00 GMTUS Senator Menendez Urges New Sanctions on Turkey if It Acquires More Russian Weapons
YesterdayInsurgents Who Detained President of Guinea Declare Transitional Charter - Reports
YesterdayTexas Lawmakers Propose New Congressional Districts in Cities of Austin, Houston
YesterdayIOM Looking for Alternatives for Haitians at US Border, Brazil Being 1 Option - Sources
YesterdayCzech Republic Will Purchase Israeli-Made Air Defenses to Replace Soviet Gear
YesterdaySPD Leader Scholz Says Yet to Hear Congratulations From CDU/CSU Rival