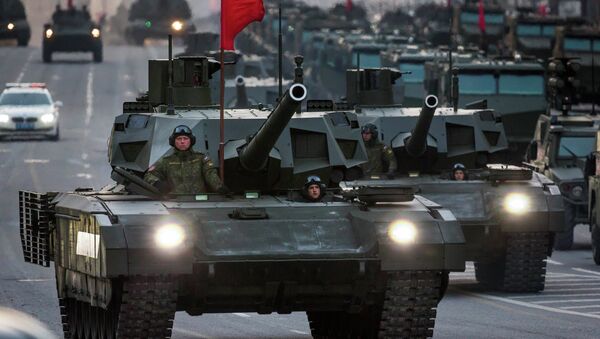 © AP Photo / Alexander Zemlianichenko
Subscribe
Russia's new Armata tank is a highly touted combat vehicle that is expected to form the backbone of the country's military for years to come, and its designers say it may one day be able to operate autonomously on the battlefield.

The tank was unveiled in April ahead of Russia’s World War II Victory Day 70th anniversary parade, and its designers claim it is 20 years ahead of anything in the West.

The Armata does sport some impressive specs, including state of the art weaponry, a remote control turret, and outer armor that explodes on impact to prevent shells from reaching the crew inside.

The tank's interior features a capsule that keeps the crew isolated from ammunition and fuel, which could increase the chances for the crew's survival if the tank is hit. The Armata also is much larger than earlier Russian tanks. One designer told the Associated Press that the new tank is as pleasant and easy to drive as a modern SUV.

"For the crew, it's like playing a video game," Ilya Demchenko, one of the Armata's designers, was quoted as saying by the AP.

The Armata's chief designer, Andrei Terlikov, said that the new technologies built into the Armata could make it possible to someday build a fully robotic vehicle that would operate autonomously on the battlefield.

The Armata is built on the same unified platform as that of a family of new armored vehicles, which helps lower production costs and facilitates future development, the AP reported.

An active protection system forms an outer perimeter of the Armata's defenses: When the system spots an enemy projectile, it fires a round to destroy it or knock it off its path.

Currently, the tank sports the standard 125-mm cannon – similar to those used on current tanks – which can fire both regular shells and rockets. But, designers say, in the future, it could easily outfitted with what the AP dubbed a "Super Cannon" – a much more powerful 152-mm cannon.