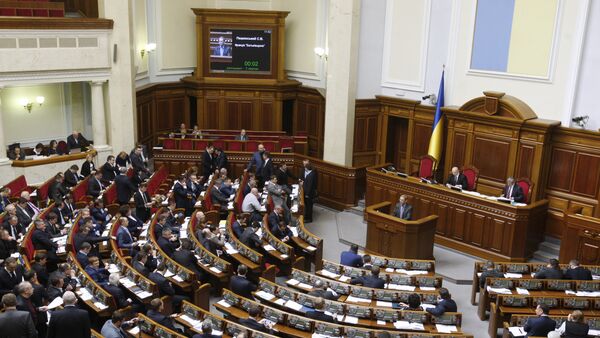 Kiev may ban trade with the self-proclimed republics of Donetsk and Lugansk, and with Russia's peninsula of Crimea, as a bill has been submitted to the Ukrainian parliament.

Business as Usual: Ukrainian Goods Flooding Into Donbass Despite Blockade
KIEV (Sputnik) — A bill seeking to ban trade with what Kiev regards as its "occupied territories" in the country's southeast and the Black Sea peninsula of Crimea has been submitted to the Ukrainian parliament, the legislature said Friday on its website.

The draft law titled “on the trade ban with temporarily occupied Ukrainian territories” was handed in by Yuriy Levchenko, a non-attached member of Ukraine’s unicameral Verkhovna Rada.

It comes after Yuriy Lutsenko, the leader of the Bloc of Petro Poroshenko party, urged to “stop trading with occupants” and paying social benefits to people in the conflict zone.

Ukraine's southeastern regions of Donetsk and Lugansk were hit by a humanitarian crisis last year after a Kiev-led military operation there disrupted lives of millions and killed over 6,400 people, according to UN estimates.

The humanitarian crisis escalated in November 2014 when Ukrainian President Petro Poroshenko signed a decree imposing an economic blockade on self-proclaimed Donbass republics and withdrawing all state-funded health, educational and social protection organizations from the region under control of independence supporters, who refused to recognize new Kiev authorities that came to power after a coup in February 2014.