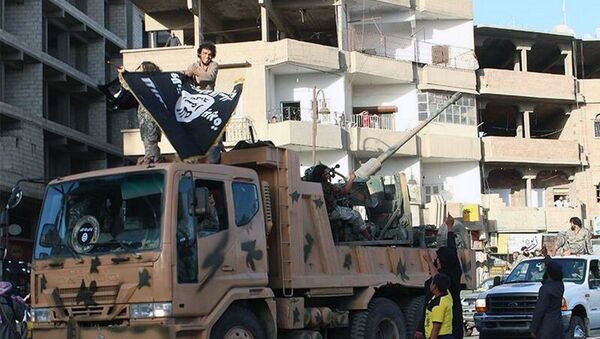 Iranian Parliament Speaker Ali Larijani accused the United States and other "big powers" of providing weapons to terrorists in the Middle East so that they would launch a campaign against the Islamic Republic.

One terrorist group in particular has an arsenal worth $30bln, Larijani said not naming the group but apparently speaking about Islamic State, which seized the armaments the US sent to Iraq during its June 2014 offensive.

Arabic joke making the rounds: Before US sends more weapons to Iraq, it should check if ISIS has enough storage space. (H/t Mohd al Dulaimy)

The Sunni group known for its countless atrocities across the Middle East has efficiently used US-made weapons against the Iraqi army. Following the fall of Ramadi much has been said about militants carrying out suicide attacks on American Humvees and the advantage this type of vehicle gives to create massive damage.

"We should see where these weapons have come from; they have, surely, not fallen from the sky, rather, they have been provided by the big powers and the countries which have manufactured those weapons have urged the terrorists to aim them at Iran," the speaker noted.

US-Led Coalition Losing Fight Against Islamic State - Poll
In May, a senior commander of Iran's Armed Forces accused the United States of creating the Islamic State as part of a strategic goal to redraw the map of the Middle East.

The Sunni group, notorious for its brutality, "is the product of the thoughts and acts of the US state-sponsored terrorism," said Brigadier General Massoud Jazzayeri, the deputy chief of staff of the Iranian Armed Forces, as quoted by the Fars news agency.

The US didn't create ISIS. Just all the factors which led to their foundation, support, funding, and also supplied all of their weapons